Broadway Tour of "Something Rotten!" at the Orpheum Theatre 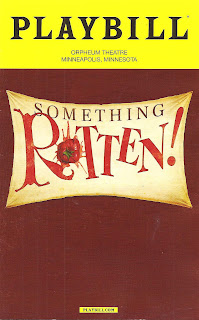 A must see magical new original musical!
A musical!
There's nothing as amazing as a musical
With song and dance and sweet romance
And happy ending happening by happenstance
And you'll see, it will be only the beginning
This glorious creation called a musical

How could anyone resist that?! Something Rotten! is the ultimate musical about musicals, which gloriously celebrates this truly American art form while hilariously poking fun at it (in a loving way). The miraculous thing is that it was written by two brothers with no previous experience in musical theater (but an obvious love for and knowledge of it). Screenwriter Karey Kirkpatrick and songwriter Wayne Kirkpatrick collaborated (with some help from John O'Farrell) to create this charming story of two brothers who wrote the world's first musical. One wonders how much of the show is art imitating life as the Bottom brothers struggle to write a hit. But whatever struggles the Kirkpatrick brothers went through, it paid off; they have succeeded in writing a "must see magical new original musical," something that's in short supply in the days of jukebox musicals and movie adaptations. If you love musicals (or love to hate them), make your way through the April snow to downtown Minneapolis to enjoy this super fun and fantastic show.

Something Rotten! is a broad campy comedy about the making of a musical, similar in feel to The Producers and Spamalot. The musical-within-a-musical concept allows the creators to satirize the form while still remaining true to it. Our story takes place in the late 16th Century ("Welcome to the Renaissance"), the blossoming of art and culture, as well as toilets that flush (into the street). Playwright Nick Bottom needs a hit, but Shakespeare is hogging all the glory. So Nick pays a soothsayer to tell him what the next big thing is theater is going to be, and this Nostradamus sees Shakespeare's greatest work Hamlet, as well as the birth of musical theater. Except that he gets things a bit jumbled (fortelling the future isn't an exact science), so what Nick ends up writing, with the help of his sweet lovesick poet brother Nigel, is a mash-up of Hamlet and popular musicals from Annie to Phantom. Which is great fun for the Something Rotten! audience, but not so much for the Omelette: The Musical audience and investors. Or Shakespeare, who dons a disguise (like many of his characters) to sabotage the play. But as the Bard says, all's well that ends well, and in this case that means the Bottoms head to America, where musical theater is truly born.*

I first saw Something Rotten! on Broadway on the same day that I saw Hamilton for the first time. The experience of Hamilton was so overwhelming that I didn't appreciate Something Rotten! as much as it deserved. I only started listening to the cast recording in the last few weeks, when I remembered just how clever this show truly is. The bright and cartoonish (including colorful costumes and 2-D set pieces) 16th Century tale is full of charming anachronisms and too many musical theater references to count. The song "A Musical" ingeniously describes the silly wonder of musicals ("So an actor is saying his lines and then out of nowhere he just starts singing? Well that is the [starts singing] stupidest thing that I have ever heard.") while including musical references to what feels like dozens of shows, from RENT ("some musicals are very serious") to South Pacific to Chicago to A Chorus Line and much more. The second act performance of the musical-within-a-musical Omelette includes lines, characters, and plots points from dozens more musicals, and part of the fun of this show is trying to catch and identify them all.

Something Rotten! has been on tour for over a year (and had the misfortune of arriving in Minnesota in the middle of an April snowstorm), and this cast has settled into a brilliant ensemble that makes the show look easy and fun. The choreography (by Casey Nicholaw, who also directs) is big and splashy, with many dance breaks for no reason other than the joy of it, and satisfies every desire for musical theater dancing. The huge ensemble performs the choreography with precision and animated emotion, while also donning many different costumes to play many different characters.

And I can't say enough good things about the lead and featured actors, starting with Rob McClure as our hero (or anti-hero) Nick Bottom. He's so charming and funny, making the most of every little moment, that you can't help but root for Nick even when he's stealing ideas and lying to his family. He and Josh Grisetti as the sweet adorakable Nigel have a believable brotherly relationship that presumably makes the creator brothers proud. Another thing to love about this show is that Nick's wife Bea (beautifully played by Rob's real-life wife Maggie Lakis) is a strong character who has an entire song about how she's his equal partner in life ("Right Hand Man").

Other highlights in the cast include Autumn Hurlbert as Nigel's sweet poetry loving Puritan love interest, Scott Cote as her strict double entendre spouting Elvis impersonating father, and Blake Hammond as the soothsayer who gets everything almost but not quite right. And now we get to one of the biggest thrills of the evening for this RENThead, watching the original Roger, Adam Pascal, as the hilarious scene stealing rock star Shakespeare. He's funnier than I've ever seen him, but still so cool and sexy, and a little bit ridiculous, as the preening Elizabethan playwright in leather pants and a frilly collar. The whole cast really gels and are all a joy to watch.

Something Rotten! is an entirely satisfactory experience for people who love musicals. And with musicals this funny, clever, catchy, and gloriously performed, what's not to love?! Something Rotten! plays through Sunday only, when it will leave our cold Minnesota for (hopefully) greener pastures.


*Plot summary borrowed from what I wrote about the Broadway production in 2015.