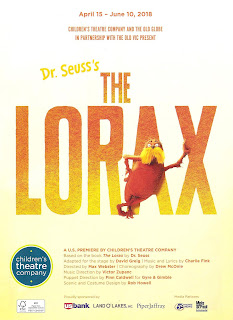 Unless. What a powerful word. So many scary things might happen. Unless. Unless what, you ask? "Unless someone like you cares a whole awful lot, nothing is going to get better. It's not." The best thing to happen lately in this dark and scary world is people caring a whole awful lot about things, and taking to the streets and the polls to make them better. That's the heart of Dr. Seuss's story The Lorax, which specifically is talking about the environment, nature, the wilderness around us. The Old Vic Theatre in London has turned this beautiful story into a charming, playful, and poignantly relevant musical that is now receiving its US premiere at Minneapolis' Children's Theatre Company (in conjunction with San Diego's Old Globe Theatre, where it will play this summer). It gave me all the feels, and had me walking down the street on this first truly spring-like day in wonder. Such is the power of theater, of stories, of people who care a whole awful lot.

Dr. Seuss's book The Lorax came out in 1971, but I don't think I've ever read it, at least not that I remember. I can't speak to how closely the adaptation follows the book, but much of the dialogue sounds very Seussian, as if playwright David Greig lifted it directly from the book. The story-within-the-story is told when an old man who lives in a secluded tower is asked to tell the story of the Lorax, whose name is on the base of a statue that says "unless." He reluctantly agrees, and we enter the Once-ler's story. As a youngster he was kicked out of his hard-working but greedy family's house to find his fortune. He eventually arrives in a beautiful valley populated with Truffula trees, and decides to knit something from their silky tops. When he cuts down one of the trees to get more knitting material, a small orange creature called the Lorax appears and tells him to stop. He's a caretaker and protector of the trees, who cannot speak for themselves. The Once-ler agrees, until the Lorax leaves and someone comes along and buys his knitted thing, which he calls a thneed. Believing this is the thing that will make him rich, he calls his family and they open a factory, cutting down more and more trees and polluting the valley with smog and runoff from the factory. Lorax and his friends try to stop him, but Once-ler's greed knows no bounds, and he only stops when the trees run out, and his success disappears as quickly as it came. He wants to be friends with Lorax again, but that's impossible, and Lorax leaves the valley that is now devoid of trees and animals. "Who knew The Lorax was such a depressing story." But it's not depressing, it's a warning. And Once-ler realizes that we must all be like the Lorax and defend and protect the trees.

It's enough to make you cry, isn't it? It did me, this inspirational story so beautifully told. The original production team re-created the show for the CTC stage (including director Max Webster, choreographer Drew McOnie, puppet director (puppet director?!) Finn Caldwell, and scenic and costume designer Rob Howell), but the cast is all local. This truly is an ensemble show, with most actors playing multiple roles and taking turns as narrator, or storyteller. As the Once-ler, Steven Epp is as playfully charming as he is deliciously evil. The title character is played by an adorable mustachioed puppet manipulated by H. Adam Harris, Meghan Kreidler, and Rick Miller, three people moving as one and giving the Lorax a spirit all his own. H. Adam also provides the Lorax's voice, so warm and expressive. The ensemble is filled with too many wonderful actor/singer/dancers to mention (Ansa Akyea, Emily Michaels King, Ryan Colbert, oh my!).

Yes, this is a musical, with fun, catchy, clever songs throughout the show (my favorite: "Everything You Need is Right Here"). CTC's resident Music Director Victor Zupanc leads a small three-piece band (himself on keyboard, plus percussion and bass), which I didn't realize was onstage the whole time on a raised platform behind the set pieces. The sound is fleshed out by a couple of ensemble members doubling as musicians, Christopher Becknell on guitar/fiddle and Ryan Lear on guitar/banjo, which adds to the storytelling troubadour feel of the show.

The storytellers are dressed in what I would say was depression-era Americana garb,
except this show is from England. Whatever it is, it serves as a sort of neutral against which the bright colors of the animals and Once-lers pop. The set is pretty magical, from the warm and fuzzy Truffula trees descending from the ceiling, to the simple but cool effects to create the fish's pond and shadows through the forest, to the massive factory machines. Charming puppets are used to represent not just the Lorax, but also fish and birds, manipulated by the versatile and hard-working ensemble.

The charming, magical, fun, and poignant Dr. Seuss's The Lorax continues at CTC through June 10 and then moves on to speak for trees in San Diego, and hopefully around the world.