"Guess Who's Coming to Dinner" at the Guthrie Theater 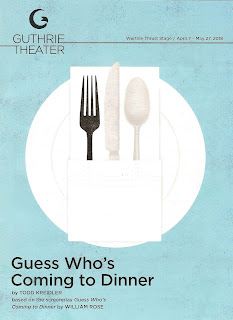 The 1967 movie Guess Who's Coming to Dinner is a classic, but I don't think I've ever seen it. Or if I have, I don't remember it. But because this movie has become such an integral part of our culture, even people who haven't seen the movie know the premise: a young woman introduces her black fiance to her white family, who, despite being liberals who believe in racial equality, have trouble accepting the relationship. A stage adaptation of the movie was written just a few years ago (by Todd Kriedler) and is currently showing on the Guthrie mainstage. Why tell this story 50 years later? In a world in which black men are arrested for sitting at Starbucks, it's still an important and unfortunately relevant story. But it does feel a little too easy for the mostly older white audience to laugh at these people's reaction in a past we may think we've overcome, but which we obviously haven't.

Because this is a new play, although based on an old story, the playwright was able to tell it in a more modern way, and make sure that all of the characters, particular the women and people of color, have a voice and get to tell their part of the story. The first act is mostly about Matt and Christina Drayton's beloved only daughter returning home to announce she's marrying Dr. John Prentice, an accomplished doctor with whom she fell in love just ten days ago. After the initial shock wears off, Christina supports her daughter, while Matt is worried about the difficulties they will face as an interracial couple in a world that won't support them. So far the play is a story about white people and their prejudices, and the easy laughter of the mostly white audience made me a little uncomfortable. It is a comedy, you're supposed to laugh, but somehow some of the laughs felt wrong, even though the audience also booed or groaned at all the appropriate places. I couldn't help thinking about the last time I was at the Guthrie, to see Familiar, a similar family dramedy of an African American (specifically Zimbabwean Minnesotan) family and the culture clash when their daughter marries "a white boy from Minnetonka." A play that felt much more modern, with a much more diverse and welcoming audience.

But the second act turned things around for me a bit. The "who" of the title actually refers to John's parents, whom Joanna invites over for dinner as a surprise, not realizing that John hasn't told them he plans to marry a white woman. The story begins to get a little more well-rounded here, as the black folks get to speak up and have their say. John's father is just as against this relationship as Joanna's father, and there's that generational conflict of "look at all I've sacrificed for you to get where you are and you're going to throw it all away." And the women get to have their say too; the mothers bond over losing a child, and try to get the fathers to remember that it's the love between their children that really matters. The fathers fear the couple won't survive in the harsh reality of the world, but someone (I think it was John's mother) says that they'll change the world. That's how change comes, not from people who react based on fear of the reality of the world as it is, but who act based on the hope of how they want the world to be.

Unfortunately the end of the play brought back that inappropriate laughter again. In what I thought was one of the most sober and poignant moments of the play, John's father, who has retreated to the car because he can no longer deal with the situation, comes back in and says he's afraid someone will call the police if they see him in this wealthy white neighborhood, which is followed by one of the biggest laughs of the night. A black man being afraid someone will call the police if he's in the "wrong place" is not a joke, it's a sobering and deadly reality, maybe even more so in 2018 than in 1967, and it felt like the audience missed the point.

Inappropriate audience reaction aside, the cast and creative team do a really beautiful job telling this story. Director Timothy Bond keeps the momentum moving and nicely mixes the comedy with the more poignant moments. Former child actor Maeve Moynihan, in what may be her Guthrie debut as an adult, certainly in a role this large, is just a delight as Joanna. JaBen Early is also wonderful as her Dr. John, as elegant and charming a son-in-law as any parent could ask for. As Joanna's parents, David Manis is every bit the lovable curmudgeon, and our beloved Sally Wingert is as strong as ever. Derrick Lee Weeden is a powerful presence not to be ignored as John's father, and the great Greta Oglesby says so much with just her expressions and physicality as John's mother. She doesn't have a lot to say at first, and I was just waiting for her to have her moment, and when it came she did not disappoint. Peter Thomson brings his trademark twinkling charm to the role of Matt's golfing buddy monsignor, and Michelle Duffy is a perfect picture of polite racism as Christina's soon-to-be-fired coworker. Last but not least, Regina Marie Willliams, who brings realness to every role she plays, makes the housekeeper Tillie the most human, relatable, and naturally funny character in the play.

The set looks like something out of Mad Men, with a sunken living room, chic mid-century furniture, bright colors, and wood paneling. The incredible detail continues on into the wings, where from my house left seat I could see into the kitchen area. The set also provides many areas for conversations and interactions, including an outdoor patio just off the stage. And the costumes are appropriate for the period and the characters, and don't veer too var into the far-out of the late '60s. (Scenic design by Matt Saunders and costume design by Lydia Tanji.)

Guess Who's Coming to Dinner the play is not just the movie plopped onto the stage. While still set in 1967, a current adaptation can make the story more well-rounded and make sure everyone's voice is heard. As always at the Guthrie, it's beautifully produced, and the conversations and interactions are thought-provoking and very much still relevant today. But I would love to see a more diverse audience, and an audience that gets this is not just an easy period comedy to laugh at from our place of superiority because we're so much more evolved now. It's quite obvious we still have a long ways to go in terms of race relations, and this play should be a reminder of that, not simply a quaint look at a past long gone.

Guess Who's Coming to Dinner continues through May 27.