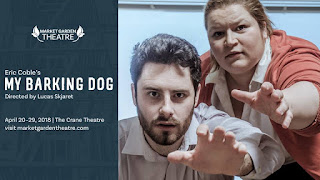 Eric Coble's play The Velocity of Autumn ran for just a month on Broadway four years ago, and I was lucky enough to see it. I really don't understand why it was such a short run, except that maybe the intimate family story plays better on smaller stages. Seeing it again at Old Log a few years ago  confirmed my opinion that it's a beautifully written play, smart and funny and poignant and relatable. I have now seen my second Eric Coble play, thanks to the small theater company Market Garden Theatre producing My Barking Dog in the Crane's intimate (and not yet completed) studio space. This play is also beautifully written, although much different than The Velocity of Autumn. My Barking Dog starts off as a real and relatable story of two individuals, and then veers off into the fantastical, but it's a journey I was happy to take because of the beautiful, odd, surprising script and the strong performances by the two-person cast.

The play starts off as parallel monologues by Melinda, a worker at a printing factory, and unemployed Toby. The two characters alternate telling stories about their lives, from mundane observations to profound realizations. I instantly liked both of these people and found much to relate to in their almost poetic ruminations. At some point the two stories merge into one, when both people, who live in the same apartment building in some unnamed city, see a coyote. Both characters are missing something in their lives, and find a purpose in the coyote. Melinda buys ground beef and puts it out to lure the coyote, and the two develop a friendship as they wait for his arrival. Their obsession with the coyote gets a little extreme, when one of them has a romantic encounter with the coyote and might be pregnant with coyote babies (and it's not the one you think!), and the other begins doing things to make space for the wild within the city. Their attitude changes from: what is this wild creature doing in our city? To: what is this city doing in this wild creature's land? "The wild needs a home too."

The play is performed in a small room with just two rows of chairs for maybe 40 audience members, so it's very up close and personal. There's nowhere for the two actors, Victoria Pyan and Mike Swan, to hide. And they don't need to; they both give really great performances, very real and believable as both characters descend into a more wild version of themselves. They use the entire space well, populated with just two metal chairs, and a cityscape painted on the back wall. About halfway through the show, Melinda takes out a piece of green chalk and begins drawing deliberate scribbles on the floor, representing the encroaching wild (I think). By the end of the play both actors are disheveled and covered in chalk (and not much else), as they give themselves over body and soul to the storytelling. (Scenic design by Leazah Behrens, direction by Lucas Skjaret.)

My Barking Dog is a perfect play for Earth Day, as it explores the idea of nature vs. civilization, and how humans can exist in a wild world. We may think we've tamed Nature, but then something happens, like an April blizzard that shuts down everything, or the appearance of a wild creature in the city, that makes us realize it's all just a pretense. Coyotes are a brilliant metaphor for that. When sleeping with the windows open, I've heard howling in the middle of the night that I like to think are coyotes. There's something wild and free about the sound, about these untamed creatures living in our "civilized" world, reminding us that we exist in Nature, no matter how much we try to subdue or ignore it.

The LGM Studio is the Crane Theater's second performance space, but as it hasn't been completed yet, so unfortunately there are sound conflicts with the other performance space (which I experience last week as well). It requires a little more concentration, a little more active ignoring of anything happening outside of the room, but it's possible because what's happening in that room is so engaging. And after tonight My Barking Dog will be the only show at the Crane, so that will no longer be an issue.

My Barking Dog has seven performances only, closing on April 29, so act quickly to see this beautifully odd and surprising little gem of a play (more info here).