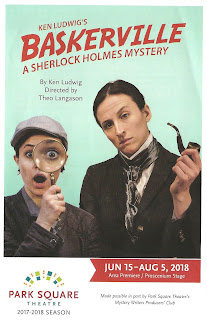 Staging a mystery play during the summer is a longstanding tradition at Park Square Theatre, and I've come to look forward to it every year. It's always fun to immerse yourself in the light yet brain-teasing summer blockbuster fare. But their production of Ken Ludwig's Baskerville: A Sherlock Holmes Mystery is anything but traditional. This new play tells one of the most well known Sherlock stories in a fresh, fun, and imaginative way, with just five actors and a whirlwind, almost slapstick style. Director Theo Langason brings all the innovation and physical storytelling experience from Sandbox Theatre, of which he is an ensemble member, to bear on this wonderfully playful and endlessly delightful production. And the fantastic five-person cast is so playful and fun to watch, including a female Holmes and Watson, because why not?! At a time when so many of us need it, Baskerville provides pure escapist summer fun.

This Baskerville is an adaptation of one of Sir Arthur Conan Doyle's most popular novels, The Hound of the Baskervilles. It revolves around a country estate and the legend of a murderous hound. Sir Baskerville was found dead, and his friend asks Miss Holmes and Dr. Watson to help find the cause of death, so that the same fate does not befall Sir Henry, heir to the estate and newly arrived from Texas. Holmes dispatched Watson to investigate while she stays behind in London (or does she?!). Of course Holmes gets her man in the end, the identity of which may already be known to those familiar with the story. But the fun of the play does not come from finding out whodunit, but in watching these iconic characters as they investigate and eventually discover whodunit.

From what I can tell this play was not written for a female Holmes and Watson; it appears that this was Park Square's choice. And a brilliant one at that, because the iconic and familiar characters work just as well as women (all of the pronouns have been changed to female, although they're dressed in pants and flirtatious with women, so perhaps we should call them gender fluid). And when you cast two fantastic actors like McKenna Kelly-Eiding and Sara Richardson as Holmes and Watson, respectively, it makes the gender swap seem downright inspired. The characters themselves are not substantially changed, so the story remains faithful to the source, but with the added dimension of female friendship (which is not depicted nearly enough on stage or screen) and smart, capable women getting the job done. Hooray for that!

In addition to McKenna Kelly-Eiding's sharp and business-like Holmes and Sara Richardson's sweet and awkward Watson, just three other cast members (Eric "Pogi" Sumangil, Marika Proctor, and Ricardo Beaird) play some 40 characters. The quick changes come fast and furiously, at times onstage, with occasional winks and nods to the fact that we're putting on a show here. Everyone in the cast is so delightful and versatile as they take us through these eclectic characters with a myriad of accents and physicalities. This is a show that's only going to get better throughout the run, as the cast becomes more comfortable, more loose and playful, more determined to crack each other up. When the people onstage are having this much fun, it's impossible for the audience not to have fun along with them. This cast is already on my short list for best comedic performance by an ensemble in the TCTB Awards.

The stage has three prosceniums in which the scenes take place, a large one in the center where the larger tableaux are created, and two smaller ones on the side through which small room setups (a bedroom or Sherlock's office) appear. Sometimes one character is telling a story, while we see it play out in the large proscenium. Costume, wig, and accessory changes help the actors switch from one character to the next in quick succession. The attention to detail in every design and performance choice makes for a consistent and highly entertaining show. (Scenic design by Eli Sherlock, costume design by Mandi Johnson.)

This summer mystery is so much fun to watch, my face hurt afterwords from two and a half hours of constant smiling and laughing. Kudos to playwright Ken Ludwig, director Theo Langason, the design team, and this intrepid cast (including four busy stagehands) for taking a familiar 100+ year old story and telling it in a new and innovative way that is both respectful of the source and entirely original.