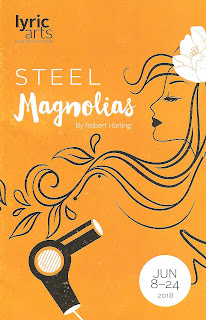 If you've only ever seen the movie version of Steel Magnolias, you might be surprised when you see the play on which it was based. Unlike the movie, the entire play takes place in Truvy's beauty salon (where the motto is, "there is no such thing as natural beauty"), and the only characters we see are the six strong, funny, loving Southern women who inspired the title. Husbands, boyfriends, children, and dogs are talked but about never seen, so that the focus of the story is the women and their undying friendship. Lyric Arts' production features six wonderful actors who bring these women to life, directed by a #TCTheater actor who can break my heart and crack me up at the same time, Angela Timberman. She and her cast bring that beautiful "laughter through tears is my favorite emotion" feeling to every moment of this story. So head up to Anoka through June 24, grab some popcorn, and have a good laugh and a good cathartic cry (it was a two-tissue play for me).

The play takes place on four Saturday mornings over a couple of years in the late '80s, marked by events in young Shelby's life - the morning of her wedding; the following Christmas when she announces that she is pregnant, which poses a danger to her health; shortly before her mother donates a kidney to her; and (spoiler alert!) after her death. The beauty salon is a place where the women gather not just to get their hair done, but also to gossip, needle each other, laugh, and support each other in whatever way is needed. Truvy is the mother hen, and a mentor to new stylist Annelle, who transforms from an insecure abandoned wife, to a party girl, to a born-again Christian, to a wife and mother. Regular customers include the delightfully grumpy and matter-of-fact Ousier and her frenemy, the wealthy and recently widowed Clairee. And then there's Shelby's mother M'Lynn, who would do anything to save her daughter, even while she knows that she can't. #bringtissues

Lyric Arts has assembled a wonderful cast of women, with some welcome diversity. Juliette Aaslestad is a bright light as Shelby, such a source of life and joy. Anni Amberg is strong as her mother; a bit young for the role but otherwise wholly believable in the range of emotions M'Lynn goes through. Jane Hammill-Golembeck and Kathleen Hardy are a hoot as the always bickering Ouiser and Clairee; Lisa Vogel is a stabilizing force as Truvy, who holds them all together; and last but not least, Sulia Rose Altenberg creates a specific and delightfully quirky Annelle.

The stage has been transformed into an '80s salon so bright and happy, you almost forget this is a tragedy. Well, tragicomedy. And it's functional too; Truvy and Annelle actually really wash, set, and style the other women's hair. The set is so detailed with vintage props that I even recognized two pieces from my 1970s childhood bedroom set. And the costumes and styling scream '80s, from the high-waisted stone-washed jeans to the side ponies. I also loved the music playing before and during the show, mostly (if not exclusively) female artists from the era, including the Judds and of course, Dolly Parton. (Scenic design by Benjamin Kramer, costume design by Lucas Skjaret, sound design by Jason Hobbie.)

The reason that this play is so successful and strikes such a deep chord with audiences is that it's true, or at least inspired by truth. Playwright Robert Harling wrote the play to honor his sister Susan, who suffered a similar fate as Shelby, and the "steel magnolia" women he grew up with, including his mother. For some reason we don't get to see a lot of stories of female friendships on stage or screen, so it's a rare pleasure when we do.

Steel Magnolias continues through June 24 at Lyric Arts in Anoka.