2018 NYC Trip: "Angels in America" at the Neil Simon Theatre 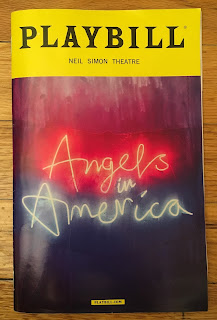 Summary: A revival (out of the National Theatre in London) of Tony Kusher's epic masterpiece centered around the AIDS crisis in NYC in the '80s, but also exploring politics, relationships, the gay culture, religion, and the very nature and purpose of life itself.

Highlights: Friends, to even come close to doing justice to this 7+ hour experience 25+ years in the making would require at least a few thousand words, which doesn't quite fit into this mini-review format. I'll try to just give you a free brief thoughts, but there's nothing brief about this play. For starters, I highly recommend the new book The World Only Spins Forward: The Ascent of Angels in America, which is a fascinating compilation of interviews about how this play came to be.

I've never experienced theater like this. It's like a day-long binge-watch of a really great show, except that it's happening live in front of you, and you're surrounded by hundreds of people in the same experience. It is a bit of a physical challenge just to be able to stay awake, alert, and engaged for that long, but once you accept that (bring snacks!), you're in for a totally unique experience.

Tony Kushner's brain works like no other playwright I know. Fiercely intelligent, bitingly funny, wildly fantastical (this plan includes not only angels, but talking puppets, trips to Antarctica, and intersecting hallucinations). The characters are all fully human - flawed and messy and heart-breakingly beautiful. And I can't say enough about this cast, all of whom play multiple characters in Tony's thoughtful double-casting. I don't have time to go into the wonderfulness of Andrew Garfield (who disappears inside of Prior), Beth Malone (a fierce angel, the alternate for Amanda Lawrence), Denise Gough (as the brave and unstable Harper), James McArdle (alternatively endearing and frustrating as Louis, whose mouth gets ahead of his brain), Lee Pace (utterly heart-breaking, his Joe Pitt is as nuanced as his Joe MacMillan), Nathan Lane (as amazing as you'd expect), Nathan Stewart-Jarrett (so much more than just the sassy black friend), Susan Brown (tough and warm as Mother Pitt and several other characters).

The staging in ingenious and utilizes three rotating circles in Part 1, that fit together like puzzle pieces or a maze. Part 2 is a bit starker, more out of this world, with lots of open spaces. The lighting creates visually stimulating shadows, and uses lots of neon lights to cool effect. This angel is darker and grittier than previous incarnations. Dressed in dark rags, with gorgeous and scary wings manipulated by shadow figures, that also move scenery around, almost as if they're making the story happen.

I don't know that any production can replicate the importance of the play in the early '90s - bringing light to the AIDS epidemic which was very much still a threat, and allowing the gay community to be seen, heard, and valued on a national scale. But the themes of the play are still relevant today, especially with a republican celebrity president in office again, and everything that goes along with that. Angels in America still has wings, and Marianne Elliot's production and this incredible cast give it beautiful, profound flight.


We won't die secret deaths anymore.
The world only spins forward.
We will be citizens.
The time has come.
Bye now.
You are fabulous creatures, each and every one.
And I bless you:
More Life.
The Great Work Begins.

*I decided to go with an abbreviated Fringe-style summary for my NYC 2018 trip, since I am in the greatest city in the world with much more exciting things to do than write! Click here to see all of my Broadway-related blog posts.