"Luna Gale" by Underdog Theatre at the Southern Theater 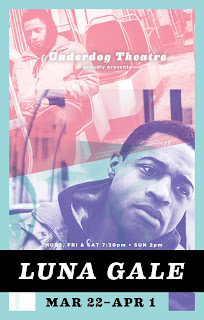 Exciting new theater company Underdog Theatre, founded by rising #TCTheater star Kory LaQuess Pullam, is presenting their third work, the first one that's not an original play written by Kory. And it's a tough one. Luna Gale is a sobering look at the system that's supposed to help young people in trouble, and the ways that it fails them. It's a heart-breaking story, but not without a glimmer of hope, thanks to the caring people who work within this broken system. And this really wonderful cast makes you feel every emotion of the story, which is sometimes unpleasant, but very effective in creating empathy for these humans and the difficult situation they find themselves in. Underdog's mission is to "create art for the underserved, underrepresented, and unheard," which is beautifully accomplished here.

We meet Karlie and Peter, teenage parents, in the emergency room waiting area. Their daughter Luna is being treated for severe dehydration, a result of neglect due to their recent meth habit. Needless to say, social services gets involved, in the form of case worker Caroline. Despite counting down to retirement, Caroline is someone who really cares about doing what's right for her charges, and is celebrating the graduation out of the system of 18-year-old Lourdes. Caroline is able to place Luna in kinship care, aka with Caroline's mother Cindy, while signing Peter and Karlie up for counseling and rehab to work towards regaining custody of their daughter. It may sound like the ideal temporary solution, except that Karlie hates her mother, and Cindy wants to permanently adopt Luna to save her soul because the end times are coming. Add in Caroline's by-the-books boss Cliff, and Cindy's Pastor Jay who has joined the case for custody, and things get real complicated real fast.

This terrific cast, beautifully directed by H. Adam Harris, includes Kory LaQuess Pullam and Briana Patnode as the young parents, so believable and natural as these young and foolish kids, who really love each other and their daughter, but don't know how to navigate the world they've found themselves in. Jodi Kellogg thankfully came out of retirement to play the role of Caroline, the caring social worker who isn't afraid to bend the rules (and let's just say this is not the first time Jodi has made me cry). Also great are Megan Kelly Hubbell as Cindy, who seems to love Jesus more than her daughter; James Rodriguez, infuriating as the unsympathetic Cliff; Imani Vaughn-Jones as the seemingly well adjusted foster care graduate; and Dario Tangelson, so convincing as the kind but manipulative Pastor Jay that I almost wanted to join his church!

The Southern Theater is always one of my favorite places to see theater, and in this case set designer Leazah Behrens has created a couple of smaller spaces within the cavernous performance space using boxes, perhaps representing the mountains of paperwork, or the transitory nature of the foster kids. The boxes are also functional, hiding props, or moved around to create a new feature. Scenes take place in a couple of areas in this fragile, temporary space nestled inside the vastness.

This play doesn't offer solutions to the many problems it addresses - teen pregnancy, drug abuse, child molestation, religious fanatacism, an overworked system. Except perhaps compassion for all involved, because things are complicated on all sides, and there are no good guys or bad guys. Luna Gale continues through next weekend only, recommended to see what's new and important in #TCTheater.