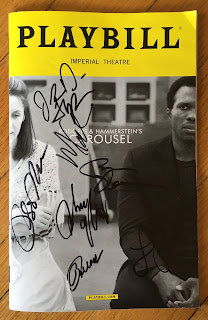 Summary: A gorgeous new revival of the 1945 dark but beautiful R&H classic musical about the troubled carousel barker and the woman he loves.

Highlights: When the playbill looks like this, you know it was something special, to stand freezing at the stage door waiting to greet the cast. I've only recently become acquainted with this classic, but now I recognize it as one of Rodgers' best scores, almost operatic in scope. Hammerstein's book, an adaptation of a Hungarian play, deals with darker themes like poverty and domestic violence, which are honestly and thoughtfully portrayed in this new production directed by Jack O'Brien. The truly brilliant ensemble cast, combined with choreography you can't take your eyes off, and a deceptively simple and undeniably beautiful design make this a shoe-in for best revival at the upcoming Tony Awards.

Joshua Henry (whom I first saw in Scottsboro Boys at the Guthrie pre-Broadway) is absolutely magnificent in the role of Billy Bigelow. His performance of "Soliloquy," a song like no other in musical theater, triumphantly takes us through the full range of emotions as Billy comes to terms with the idea of being a father. Such power and feeling are conveyed through his voice and performance. He's well-matched in Jessie Mueller as Julie. She's best known for her recent work in more folk/pop musicals, but she sounds absolutely lovely singing this more classical score. And despite her circumstances, her Julie has strength and chooses the life she wants. This fantastic cast also includes opera star Renee Fleming as Julie's cousin, Margaret Colin (Margo from my dear departed soap As the World Turns) as the carousel owner, and Lindsay Mendez and Alexander Gemignani bringing the comedy and lighter side of romance as Mrs. and Mr. Snow.

The group dance numbers are the highlights in Justin Peck's gracefully athletic choreography. The sailor number "Blow High, Blow Low" nearly brought the house down, and includes a particularly striking sequence that mimics the rolling waves. And the 20+ piece orchestra under conductor Andy Einhorn brings out all the lushness and complicated beauty in this score.

When people ask - why do these dusty old shows with problematic elements, why not just shelve them and do new work instead? We definitely need new work, but this Carousel proves that these old classics still have value and importance when done well and thoughtfully. This show is so moving and absolutely thrilling.