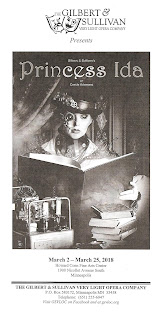 This is the fourth year in a row I've attended Gilbert and Sullivan Very Light Opera Company's spring production of, you guessed it, a Gilbert and Sullivan operetta. Before becoming familiar with this company (that's been around for more than 30 years), I had no idea G&S wrote so many shows! I was only familiar with the more popular ones (e.g., Pirates of Penzance and H.M.S. Pinafore, both of which I love), and it's been fun to discover the lesser known and performed works of this unique composing team. This year they're performing Princess Ida in a steampunk style (which just makes everything more fun). And similar to Park Square Theatre's ingenious adaptation of Pirates of Penzance (now playing through March 24), GSVLOC has made some minor adjustments that make this 130 year old play a little more palatable to modern ears. The result is quite a feminist story of a university by and for women, who live without men. It's Gilbert and Sullivan, so of course it ends with a happy ending to a love story, but at least these female characters are a little more smart and independent than the usual. And as always, it's such a treat to the ears to hear an operetta performed with cast and orchestra too large to count (but north of 30). Traditional, yet modern, this Princess Ida strikes just the right tone.

The story is inspired by a Tennyson poem and is told in three acts (with two intermissions - take a nap before the show and get some coffee). The first act takes place in the court of King Hildebrand, whose son prince Hilarion was betrothed in infancy to Princess Ida from a nearby land. All are surprised when King Gama arrives and tells them the Princess runs a women's university and will not be arriving. In the second act, we visit the university, where the women study and debate many subjects. Since men are not allowed at the university, and are seen as lesser creatures, Hilarion and two friends disguise themselves as women, and when they are discovered, much havoc ensues. The third act sees the two sides preparing to battle, but ends with a happily ever after.

It always amazes me how so many actors can fit on that tiny stage and not make a mess of things (or maybe it just looks tiny with so many people). Under director Joe Andrews, everyone is in their place, and everyone is so expressive and in the moment, even if they're in the very back. And combined with the huge backstage orchestra, directed by Randal A. Buikema, the sound is lush and gorgeous. Highlights in the cast include Sarah Wind Richens in the title role, no pushover princess she; Scott Benson as her wacky father; Doug Freeman, Joe Allen, and Alessio Tranchell as his comically dimwitted sons; Deb Haas as the ever philosophizing professor; and Anthony Rohr as the young and noble Prince Hilarion.

Steampunk is a mix of the Victorian and the mechanical, and this production plays it to the hilt. Costumes (designed by Barb Portinga) are gorgeous gowns and suits, but with added elements that push them over the edge into steampunk territory. Every one is different, a difficult task with this many characters. The set (designed by Larry Rostad) has mechanical and whimsical elements (I particularly liked the horizontal/vertical climbing scene).

If you're a fan of Gilbert and Sullivan performed with large cast and orchestra, in a traditional manner with a modern (and steampunk!) twist, then Princess Ida is the show for you. Playing weekends through March 25 at the Howard Conn Fine Arts Center attached to Plymouth Congregational Church on Franklin and Nicollet (yes you can park in the lot).