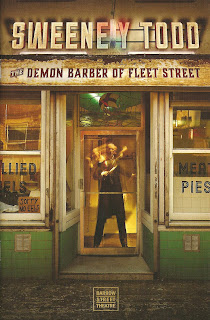 Summary: Stephen Sondheim's story of the murderous barber gets immersive treatment in this Off-Broadway production in a theater that's been turned into a pie shop.

Highlights: After playing for a year, it's a little easier to get tickets to this one that it's been in the past (we got them day of at TKTS, and also won the lottery for a timeslot we couldn't make). It's well worth a visit no matter how you come by the tickets. You can arrive early and eat a meat (or vegetarian) pie at your seat, if you dare (no one was harmed in the making of the pies, I'm certain). Seating is at six counters arranged perpendicular to the stage, with a few rows behind and a few in a tiny balcony above. But there really is no stage, per say, just a small space in front with the pie counter and stairs going up. The eight-person ensemble moves in and around the crowd and on the counters, sometimes looking and singing directly at the audience, for a truly immersive experience (if you're bald, be forewarned - you might get some of Pirelli's elixer). Even the super cool lighting effects are accomplished with hidden lights behind vents or blinds, so that when you first enter there's no clue that you're actually in a theater. But the best part of this intimate setting is - no body microphones! There's no greater thrill that hearing Sondheim's brilliantly dark and hilarious score sung by incredible actors mere feet from where you sit, nothing between their voices and your ears but air. A three-piece band (enthusiastically conducted by Adrian Ries on piano on the night I attended) is all you need to bring the score and story to life.

The cast is truly fantastic (under original London director Bill Buckhurst), with nowhere to hide in the intimate space. Thom Sesma is a dark and haunting Sweeney, and Sally Ann Triplett is perfection as Mrs. Lovett. A few familiar faces to #TCTheater audiences are Stacie Bono (who you may remember as Marion in The Music Man at the Guthrie a few years ago), who played both Pirelli and the Beggar Woman; Billy Harrigan Tighe as the earnest Anthony (seen at the Orpheum in the Finding Neverland tour just a few months ago); and John Rapson (who chewed up all the scenery in the A Gentleman's Guide to Love and Murder tour two years ago) as a delightfully pompous Beadle. On the night I attended, the cast also included Zachary Noah Piser (a sweet Tobias), Danny Rothman (the smarmy judge), and Delaney Westfall as Johanna (who's lovely soprano I experienced up close and personal).

Moral of the story - even if you've seen Sweeney Todd a dozen times already (this was my 5th visit to Fleet Street), this production is worth seeing, not only for the immersive pie shop experience (modeled after London's oldest pie shop where the show was originally performed), but also for the talent of the cast, which you get to experience in a small and intimate setting. After seeing lots of shows in huge houses, often from way up in the rafters, it was a joy to be right in the middle of things.