"Indecent" at the Guthrie Theater 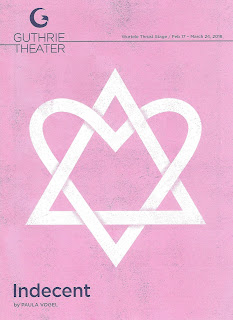 Fresh off of Broadway, Indecent has arrived at the Guthrie Theater. Ingeniously written by Pulitzer Prize-winning playwright Paula Vogel (who made her Broadway and Guthrie debuts with this play and is currently the toast of the town), the play tells the story of a play, the history of the world around it, and the interaction of the two. It's about so many things, among them the depiction of a lesbian romance on stage in the early 20th Century, the role of theater in the world, the rise of Nazism and the Holocaust, and the resulting decline of a language and a culture because of it. This new production is gorgeously designed and beautifully performed by the seven-person mostly local cast, for an incredibly moving, enlightening, thought-provoking evening of theater.

The play within this play is God of Vengeance, a Yiddish play written in 1907 by Polish playwright and novelist Sholem Asch, and translated into many languages as it played in theaters across Europe. This tale of a Jewish brothel owner and his daughter who fell in love with one of the prostitutes landed on Broadway in 1923, where the cast and producer were convicted of indecency (hence the title) because the play includes a love story between two women. Lauded all over Europe, but here in the US of A, land of the free and home of the brave, it was censored. If you've read any interviews with Paula Vogel in the last year, you'll see the parallels between Broadway then and now, between the state of the world then and now.

The play is framed by a company of actors introduced by their stage manager Lemml (Ben Cherry, the warm heart and soul of the piece). We then flash back to see the story of how God of Vengeance came to be, Lemml being present at the first reading and staying with it through Broadway. Dates, people, and translations are projected on the back of the stage as we "blink through time," with bits of the play-within-a-play being acted out on various stages around Europe and the US. It's very cleverly constructed to tell the multiple levels of stories. Eventually we end up back with that troupe of actors who, as it turns out, are presenting the play in an unconventional space, making the performance even more important to the performers and the viewers (we're now in 1940s Europe, if that gives you a clue).

The heaviness of the subject is lightened by the inclusion of music. This is far from a musical, but the music adds much to the storytelling. Three musicians (Spencer Chandler on accordion, music director Lisa Gutkin on violin, and Pat O'Keefe on clarinet) accompany the story and are also characters in it. They don't merely play their instruments (although that in itself is a wonderful addition), they embody people in this world and are as much a part of it as the acting cast. Playing Yiddish music, original compositions (by Lisa Gutkin and Aaron Halva), and popular songs of the period, the music helps us feel the story more deeply.

With direction by Wendy C. Goldberg and choreography by Yehuda Hyman (oh yes, there's dancing too!), the ensemble (also including Gisela Chípe, Hugh Kennedy, Miriam Schwartz, Robert Dorfman, Sally Wingert, Steven Epp) beautifully brings these stories to life, playing multiple characters, as well as characters playing characters in the play-within-a-play. The Guthrie's thrust stage has been transformed into an abandoned theater complete with balcony, theater seats, and a huge round skylight overhead from which light and water rain down (scenic designer Arnulfo Maldonado modeled it on an actual abandoned theater in NY, as noted in the excellent and informative program notes).

Indecent is a gorgeous play, gorgeously produced by the Guthrie in its first post-Broadway incarnation. Historically important ideas and themes that still have relevance today, with a strong beating heart, make this one to remember (continuing through March 24).