"Melancholy Play" by Theatre Elision at the Crane Theater 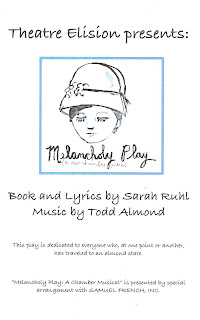 "Melancholy is gazing through an open window with longing. Depression is behind a thick pane of glass." This line from the Sarah Ruhl/David Almond musical Melancholy Play explains why, perhaps, melancholy isn't such a bad place to be for a spell. There's nothing romantic about depression, of course, but melancholy can be a bittersweet feeling. I love music and stories with a touch of melancholy, that sort of wistful feeling. Somehow it feels more real than the everything-is-sunny kind of story. This musical-called-play explores that idea through the quirky character Tilly and her even more quirky friends. Theatre Elision has been bringing us new or rarely produced female-focused musicals for about a year now, and Melancholy Play is square in their wheelhouse and a lovely addition to their repertoire. But like all of their shows, it sadly plays for one weekend only. And since I'm a little late in getting this to you, you only have one more chance to see it - today!

Melancholy Play is more of a character (and emotion) exploration than a story in which a lot happens. Tilly is melancholy, and somehow that makes everyone fall in love with her, including her therapist, her tailor, her hair-dresser, and her hair-dresser's live-in nurse/partner. Tilly celebrates her birthday with her friends, and is suddenly, unexpectedly, happy! But her friends aren't too sure about this development, and one of them slips into melancholy, or perhaps depression, herself. So Tilly and this oddball group of friends band together to get her back, because that's what friends do.

Most of the 90 minutes is sung, and immediately after the show I asked my blogger and musical theater nerd friend Laura from Twin Cities Stages if there was a recording available, and she said no, unfortunately. Because this is a score I would love to listen to over and over. Played by a string quartet plus a keyboard (musical director Harrison Wade), the music is so beautiful it at times brought tears to my eyes. In contrast, the lyrics are silly and whimsical (I swear I heard "Cheetos, Doritos, and cheddar goldfish" at one point). The contradiction makes for  a delicious combination.

Director Lindsay Redman has put together a wonderful five-person cast who sing and work well together. This is the first time I've seen Tara Schaefle take center stage, and she's just marvelous, with the perfect expression of melancholy, a lovely voice, and a quirky charm that makes it easy to see why everyone loves Tilly. Ben Rubenstein, Christine Wade, Jim Ahrens, and Ruthie Baker complete the quintet that so perfectly brings this charming and quirky little piece to life.

The sparseness of the design works well with the show. A long wooden table serves as therapist couch, dining room table, platform, and whatever else they need. Just a few chairs and some props complete the design, along with an old-fashioned bicycle that Tilly charmingly rides around the stage in one scene. My only complaint is that the actors are a bit overmiked for that space (I don't want to hear the actors breathe), but hopefully that's something they can work out as they get adjusted to the space and the equipment.

The final performance of Melancholy Play is today at 2:30 at the Crane Theater in Minneapolis. They close out their ambitious first season in June with an original musical called Grand and Glorious about musicals from the early 20th Century. This one runs for two weekends, so mark your calendars now!