"School of Rock" Broadway tour at the Orpheum Theatre 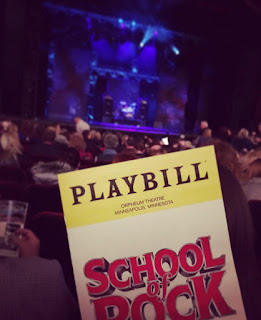 #TCTheater friends, I'm coming to you from NYC, the great white way, where I'm going to see as many Broadway shows as I possibly can, and share my experiences with you right here and on Instagram. But don't feel too envious of me, if you can't come to Broadway, Broadway will come to you. The latest Broadway show to make its way across the country to Minneapolis is Andrew Lloyd Webber's smash hit musical adaptation of the 2003 Jack Black movie School of Rock (with book by Julian Fellowes, the same writer who gave us all those delightful Dowager quips), which opened in 2015 and is still running. While it's no secret that I am not typically a fan of the movie musical adaptation, this one makes more sense than some because the source material is a story about music. About our love of music, and the power of music to inspire, motivate, and bring people together. It's also an excuse for a dozen incredibly talented young quadruple threats (act, sing, dance, play an instrument) to rock out on stage, and for the audience to rock out with them. The cliched motivational teacher story comes alive due to the talent of these kids (and the grown-ups onstage with them) and ALW's catchy rock score.

Though I've never seen the movie, my companion assured me that the plot of the musical is very similar to the movie, even if the happy ending is wrapped up a little more quickly here. Wannabe rock star Dewey is down on his luck, fired from the band that he started and his day job, and overdue in paying the rent to his former rock band buddy Ned and his girlfriend Patty (who is unfortunately written as the nagging girlfriend, when she's the only one in sight trying to do any adulting). When he accidentally intercepts a call from Horace Green prep school to Ned offering him a substitute teaching job, Dewey impersonates Ned and takes the job, thinking it'll be easy money (because how hard can teaching a bunch of privileged kids be?). Dewey-as-Ned wants to put the kids on permanent recess, until he discovers they're talented musicians. He soon turns them from classical to rock, and shares his love of rock history, music, and performance. He wants to enter a battle of the bands competition to win some cash and make a name for himself, but soon learns to love the kids, as they love him for believing in them and allowing them to be themselves. As many teachers from Mr. Keating to Mr. Schue have done, Dewey changes the lives of his students, and they have their "Oh Captain, My Captain" moment after the truth is found out, and they come to his defense and sneak away to the battle of the bands. It's here they learn the most important lesson of all: music isn't about winning, it's about sharing the joy and love of music.

Cliche? Yes. Full of broadly drawn stereotypical characters? Yes. But it's so entertainingly delivered by a dynamite cast, led by Rob Colletti as Dewey, that you almost forgive it. Rob is naturally funny, every line delivery and tiniest gesture on point. He brings almost as much energy and charisma to the stage as the true stars of the show - the dozen young actors playing Dewey's students. They're all so incredibly talented, so full of energy in the way that only kids can be. They fairly burst off the stage, jumping three feet in the air performing JoAnn M. Hunter's punchy choreography with youthful abandon. Special shout out to the musicians - Theodora Silverman giving all kinds of attitude on bass, Phoenix Schuman as the angsty lead guitarist, adorkable Theo Mitchell-Penner on keyboard, and Gilberto Moretti-Hamilton never dropping a beat on percussion. Truly the joy of this show is watching all of these children do what they love to do, portraying children who are finally set free from overbearing parents to do what they love to do. The adults gamely play second fiddle in the story, enthusiastically embodying whatever mean grown-up they're asked to. Of particular note is Lexie Dorsett Sharp, with some nice moments both musically and comedically as the obligatory love interest. It should go without saying, but it is worth noting the diverse and inclusive cast of adults and children.

The versatile set consists of several large rotating panels that form the school hallways and school room, with other sets floating in as needed. Lights and sound go big to create that rock concert feel. In another nod to the concert idea, the main cast is announced at curtain call, which is a fun touch you don't often see. These kids are clearly having a blast spending their time touring the country in this School of Rock.

As per usual, Broadway is only in Minneapolis for a week, so act quickly to be schooled by these great entertainers, young and old. And if you miss it, scroll down on this page to see what else is playing in local Minneapolis/St. Paul theater. You don't have to wait for the next tour to come to town, or get on a plane to NYC, to see high quality, entertaining, inspiring theater.