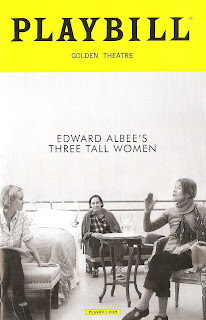 Summary: The Broadway premiere of Edward Albee's 1994 Pulitzer Prize winning play in which a wealthy old woman looks back on her life.

Highlights: Spoiler alert: the three tall women are really one tall woman at different stages of her life. The play opens on a scene in an elegant bedroom, where a woman in her 50s cares for a 91 (or 92, but who's counting) year old woman, and a woman in her 20s from the lawyer's office is trying to sort out some paperwork. The second scene switches significantly, perhaps to the mind of a woman, where this same woman in her 90s (Glenda Jackson), 50s (Laurie Metcalf), and 20s (Alison Pill) has a conversation with herself, while each is at a different times in her (their) life. The younger version wants to know what will happen to her, and vows she will not turn into those other women. They discuss what is the best time of life, and each advocates for the time she's at, which is a pretty great way to live one's life. The dialogue is smart, funny, and insightful, and the performances of these three powerhouse actors are phenomenal. With great comedic timing, sometimes talking over each other, sometimes pausing for effect, they're all so natural and present. It's quite easy to believe they're all the same women.

We had heard at the TKTS line that the play had already cancelled a few performances due to tech issues. What kind of tech issues could a three-women-sitting-in-a-room-talking kind of play have? Well, with a room like this, it's quite easy to see. The bedroom is gorgeously and impeccably decorating, letting us know immediately the status of its resident. But then it gets better, in a "how'd they do that?" sort of way. When we're in the mind of the woman, we see an exact mirror replica of the room behind it, with the old woman lying in bed, and we know it's a real room because sometimes the characters are in that room, before moving back to the front room. A mirror behind the replica room creates all kinds of dimensions and reflections, even of the audience, so that it's hard to tell what's real and what's illusion. The color palate is gorgeous, especially the three women's gowns - variations on lavender (scenic design by Miriam Buether, costume design by Ann Roth).

A fantastic script, beautiful performances, clear direction (by Joe Mantello, incidentally the original Broadway Louis in Angels in America), and gorgeous design - what's not to love?!