"Rocket Man" by Theatre Pro Rata at the Crane Theater 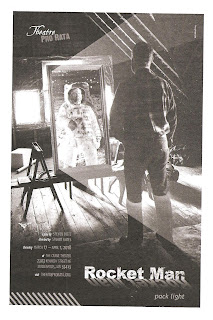 Friends, this one gave me all the feels. Theatre Pro Rata's production of Steven Dietz's play Rocket Man checked all the boxes for me. It's a little odd and unpredictable, and explores the ideas of family, science, faith, regrets, time, and life itself. And the truly wonderful and natural five-person cast, under director Stuart Gates, along with the deceptively simple design, bring it to life beautifully. But it's one of those plays I'm not quite sure how to write about. I don't want to spoil what happens, because half the fun of the play is figuring that out as it goes along. I'll try to give you a taste of it, and then if you're curious, you can go see the rest for yourself.

The "Rocket Man" in question is Donny (played by Matt Wall, whom I like more every time I see him, adept at playing the empathetic and relatable everyman). Donny is a divorced father and surveyor who wishes he were a landscape architect. You might say he's having a mid-life crisis, but it feels like more than that. He keeps losing track of time (he thinks his daughter's birthday is this week, but it was really last week, oops). He decides to give away all of his possessions and go on some undefined journey far away, possibly into the stars themselves. He has interesting and sometimes difficult relationships with his ex-wife Rita (Rachel Austin), teenage daughter Trisha (Anna Beth Baker), surveying partner Louise (Shana Eisenberg), and best friend Buck (Lanny Langston). Each one visits him in his attic, which contains the remains of his life, and questions him about his choices. The second act takes a fantastical leap which I won't spoil here, but it has all the same characters, only different, in the same situation, but different. The premise is something quite fascinating to contemplate. Curious? Good.

Set designer Ursula K. Bowden has built the frame of an attic in the middle of the Crane's open theater space, creating interesting lines and even the suspended outline of the all-important skylight, through which Donny gazes at the stars. It's appropriately cluttered with interesting junk you might find in any attic. Including a half dozen mismatched lamps, which flicker and turn on and off as if by magic, thanks to lighting designer Emmet Kowler, who has also creating some striking shadow effects.

Any play that sends me to the internet to look up a scientific phenomenon is a good one in my book. In this case, it's the precession of the equinoxes (yes, that's a real thing). Which Donny relates to his losing track of time. Rocket Man actually reminds me a little of my favorite play Arcadia in the way it talks about time, and how it can only move forward. Or so we think. Rocket Man also explores the idea of faith, mostly through Louise, who is in seminary school, and Buck, who thinks God is telling him to build an arc. I find this interchange between science and faith an interesting one to explore, as this play does.

Rocket Man is a lovely little gem of a play. I didn't know what to expect walking into the Crane on Monday night, and sometimes that's the best setup for a wonderful and moving experience. If that piques your interest, check it out at the Crane Theater in Northeast Minneapolis through April 1.