"Measure for Measure" by Theatre Unbound at Gremlin Theater 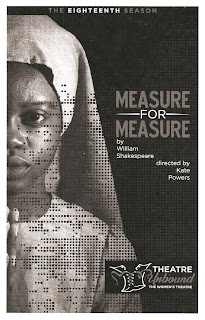 Theatre Unbound, aka The Women's Theatre, is tackling one of Shakespeare's "problem plays," so called because it falls in between the categories of comedy (in which everyone ends up happily married) and tragedy (in which everyone ends up dead, or almost everyone). They specifically chose this play for this moment because, as director Kate Powers notes in the playbill, "Measure for Measure is a potent reminder that #metoo is a centuries' old problem, that men extracting or pressuring women for sex as a transactional exchange has long been among us. Shakespeare is exploring corruption of authority, the intersection, or bypass of, justice with mercy, and sexual misdeeds that continue to infect our society and oppress those who are not invited to share in governance." Their production is powerful and well-acted, if a bit long. I wish they would have trimmed it a bit to better hone in on the important issues, but that may just be due to my growing intolerance for sitting for three hours (Angels in America notwithstanding). Still, it's a timely production of a 400-year-old play that's surprisingly relevant.

I have previously seen Measure for Measure performed by Ten Thousand Things (always the best introduction to a new Shakespeare play). It's classified as a comedy, but while it definitely has comedic moments and the trademark disguises and mistaken identities, it doesn't have that light-hearted slapstick feel of many of Shakespeare's comedies. The undertone is a bit darker, as it deals with issues of justice, judgment, and mercy. The plot concerns a man named Claudio (Leonard Searcy) who is sentenced to death for "fornication" with a woman whom he considers his wife, although the law doesn't. Claudio's sister Isabella (Ashembaga Jaafaru), who's about to become a nun, pleads with Angelo (Samantha Joy Singh), the man who sentenced Claudio, for her brother's life. Angelo agrees to spare Claudio if Isabella sleeps with him, the very act for which Claudio is condemned. Fortunately there is someone observing this mess and plotting to make it right - the absent Duke (Charla Marie Bailey), who is in disguise as a Friar. Things eventually work out in the end, which is I guess how you know it's a comedy, although the Duke puts everyone through a lot of pains before finally setting things right.*

It really is remarkable, watching this play after everything that's happened in the last few months with the #metoo and #timesup movements. What struck me most was Isabella's reaction after Angelo promises to kill her brother if she doesn't sleep with him. "Who can I complain to? If I reported this, who would believe me?" This has been the cry of women (and men) in similar situations for far, far too long. And so many kept silent because the answers was often "no one." But now many women are speaking up, as Isabella is compelled to do. And while most of us don't have a benevolent Duke on our sides, it feels like we're better at listening to and believing women now.

Theatre Unbound is known for their all-female versions of Shakespeare's plays, which is not the case here. But while this cast does include a couple of men, there are more than a few women cast in typically male roles, sometimes playing them as women, sometimes as men (signified by the mustache). It adds an interesting perspective to this play in which gender plays such an imporatnt role.

The play seems to be set in modern times, with modern clothing and one use of a cell phone, but it's not super specific, so it could really be any time. Similarly, the set is multi-leveled non-specific gray and angular, with interesting doors and arches for the entrances and exits, which could be anywhere. (Costume design by Alexandra Gould, set/prop design by Giuliana Pinto.)

Theatre Unbound has a cool audience engagement activity set up in the lobby asking a couple of questions:

Theater-goers are encouraged to write their response on a notecard and include it in the display. There were just a couple of notecards on opening weekend, but by the end of the run I bet it will be filled.

Measure for Measure continues through April 8 at Gremlin Theatre in St. Paul, just off 94 on Vandalia.


*Plot summary modified from what I wrote about the Ten Thousand Things production.