NYC 2018 Trip: "The Band's Visit" at the Ethel Barrymore Theatre 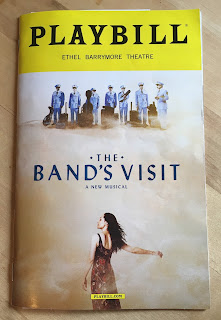 Summary: A group of eight musicians from Egypt end up in a small Israeli town due to a mix-up. Nothing much happens, and everything happens.

Highlights: Friends, this is a show that gives me hope for the future of Broadway. With so many revivals, jukebox musicals, and blockbuster movie adaptations coming out this year, The Band's Visit stands out as something truly unique, a non-formulaic musical. And yes, technically it is a movie adaptation, but since it's a foreign film (the 2007 Israeli film of the same name) that most Americans have never heard of, I'll allow it. Similar to Come From Away, it tells the story of people in a small town welcoming strangers, but on a much smaller scale. While Come From Away is about ordinary people in extraordinary times (as my friend said), The Band's Visit is about ordinary people in ordinary times, living their ordinary lives. Which is to say, extraordinary. Both the visitors and the visitees are experiencing loss, grief, boredom, and the full range of human emotions. This band showing up is the most exciting thing that's happened in ages, and serves as a catalyst, a wake-up call. And when they leave less than 24 hours later, life goes on as before, but somehow changed.

The beauty of The Band's Visit is in its simplicity, its silences, its unhurried pace. Every one of the characters introduced feels like a full and complex character, even though we don't know everything about them, just a slice of their much more complicated and ongoing life. It's a snapshot in time of the universal humanity of these specific people in this unique situation.

The staging (director David Cromer) is lovely, utilizing concentric rotating circles in a subtle and effective way to create beautiful images. And the music! I will be downloading the recently released recording as soon as I get home. A mix of Broadway style songs with traditional Middle Eastern music, it's a sound and instrumentation not often seen and heard on Broadway, including long instrumentals during scene changes. They make you wait until after the curtain call to hear the full band perform, and it's worth the wait.

Just a word about the cast, because this mini-review is turning out to be not so mini. Katrina Lenk gives a beautifully strong and confident performance as the cafe owner who welcomes the band members into her town and her home. Including the band leader Tewfiq, a role just recently taken over from Tony Shalhoub by Dariush Kashani, which you would never know because he blends so seamlessly into this wonderful ensemble of actors, singers, and musicians. They're all wonderfully specific in their characterizations, and a special shout-out to Etai Benson, who for me was the star of the recent American in Paris tour, here as a charmingly awkward resident of the town befriended by the musicians.

There's so much more to this show that I haven't mentioned (the roller skating! the clarinets!! the uniforms!!!), but to make a long story short: if you find yourself in NYC, go see The Band's Visit. And I really hope this show goes on tour, because this is a show that people need to see in small, uneventful, ordinary, extraordinary towns all over the country. A small and lovely story that covers the full range of human emotion, and highlights a culture rarely seen on American theater stages. It's such a beautiful thing to see Israeli, Arab, Middle Eastern actors play fully rounded non-stereotypical characters, telling their own story. Ensemble member and fiddle player George Abud says it best in his bio:


I hope young Arabic kids, like I was, see this show, or hear about it, or read about it, and know that there is starting to be a place for their expression, their stories and their faces. The Arab voice, rich in history and beautiful music, is vital in American theatre.