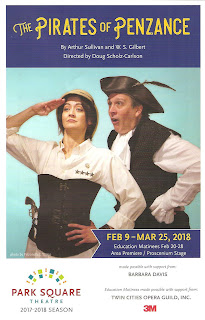 Park Square Theatre's new production of the Gilbert and Sullivan classic comic operetta The Pirates of Penzance, re-imagined by director Doug Scholz-Carlson, music director Denise Prosek, and this dreamy nine-person cast, is indeed a divine emollient. But it's not just pure escapist silliness. G&S, in addition to writing hilariously clever and gorgeously melodic pieces, also included more than a little social and political commentary in their work. Amidst all the humor and fun lies some insightful questioning of the society and politics of Victorian England. So it is entirely appropriate, then, that this 2018 production has been updated to include some current social and political commentary, and some of the dated concepts of the piece have been modernized. The result is a supremely entertaining musical that's refreshingly modern, while still respectful of the source, and even providing some historical context around the 1879 NYC premiere. I've been in love with The Pirates of Penzance since first seeing it at the Guthrie 14 years ago, then discovering the glorious Kevin Kline-ness of the early '80s Broadway production and movie. I've now found whole new ways to love it.


The plot of The Pirates of Penzance, like all G&S shows, is a silly thing that allows them to do their thing. In this case, young Frederic was mistakenly apprenticed to pirates by his nursemaid Ruth, instead of pilots as his family suggested. Contracted to serve through his 21st birthday, he is now free to leave piracy and live a more noble life. Which is to be accomplished by marrying a noble woman, to which her Major General father objects. But before this can happen, the Pirate King tells Frederic that because he was born on leap day, he's technically only had five birthdays, and is duty bound to continue the pirate trade. The pirates attack the Major General, but they're not the most successful pirates, and after some antics and hijinks, peace is restored in time for a happy ending.

The ingenious and unique thing about this production is that the performance of Pirates is structured inside of another story - that of librettist Gilbert, composer Sullivan, their actual historical producer and business manager, a woman named Helen Lenoir (who knew?!), and the company of actors, all sailing on a ship for America to open the show. The historical context we're provided includes the detail that Pirates was written in response to the lack of American copyright for the team's London hit H.M.S. Pinafore, which resulted in many productions from which G&S did not receive royalties. They opened Pirates in NYC to avoid that issue, hence the premise of this adaptation (credited to director Doug Scholz-Carlson and Bradley Greenwald, who plays Sullivan, with help from Christina Baldwin, who plays Helen Lenoir, assistant director Sophie Peyton, and the cast). This allows for commentary on the show, as sometimes scenes are interrupted for the creators or cast to add a bit of color, or for brief breaks in which we're told some historical tidbit, often from newspapers or documents of the time. It's a very clever device that would no doubt delight the creators as much as it does the audience.

I re-watched the 1983 film adaptation (available in its entirely on YouTube), which included most of the Broadway cast, this week. And although I still absolutely love it, there are some parts that are hard to watch in 2018. A big part of the plot involves the pirates marrying the Major General's daughters "against our wills, Papa, against our wills!" There's also the bit about Frederic agreeing to marry his childhood nurse Ruth (ew) until he realizes she's unattractive and old at 47. Lyrics have been changed, so now Ruth is not the poor pitiful old woman, but tells Frederic not every woman wants to marry him, and she loves him like a son. The daughters now cry "without our consent, Papa, without our consent," and the Major General objects not to having pirates as sons-in-law, but to having men who grab women without their consent as sons-in-law (or presidents). The historical context about the women important to the success of Gilbert and Sullivan, the slight lyric changes, and the casting all make this Pirates much more palatable in today's world, while still maintaining all of the fun.

I've already mentioned the two members of the cast most known to #TCTheater audiences, but the entire ensemble, some of them new to #TCTheater and new to me, are delightful, and they sound gorgeous, even though the number of voices is less than half of what's typical for this show. Co-adapter Bradley Greenwald is a delight as Sullivan, who plays the Pirate King. His Pirate King is more Johnny Depp than Kevin Kline, as Bradley brings his comedy genius to the role, as well as his gorgeous voice (as obsessed as I am with Kevin Kline, he doesn't have a voice like Bradley Greenwald!). The aforementioned Christina Baldwin, who played one of the daughters in the 2004 Guthrie production, is at her best here as the Scottish producer Helen Lenoir (with a wonderful accent), who steps in to play the roles of the Major General and the Police Sergeant. She's also written a new verse for the Major General's famous song that references historical (and current) female heroes, and it's just the injection of feminism this show needs.

As the somewhat dimwitted tenor playing Frederic, Max Wojtanowicz is so charming and funny, highlighted by a moment of audience contact in Frederic's big song of seduction. Alice McGlave is lovely as Mabel, the daughter who gives her consent to marry Frederic, and the two sound beautiful together and share a sweet chemistry. The always entertaining Zach Garcia is the proud librettist Gilbert, who takes on multiple roles in the show-within-a-show, and Elisa Pluhar is a great Ruth (reuniting Officer Lockstock and Little Sally!). Completing the hard-working ensemble are Charles H. Eaton, Elizabeth Hawkinson, and Victoria Price, playing various pirates, cops, daughters, and queens.

Music director Denise Prosek has pared down what is normally a large orchestra to just three musicians - Andrew Fleser on piano (and conducting), Carolyn Boulay on violin, and Mark Henderson on clarinets and flute. For a few songs the band expands to six-piece with the addition of cast-members Max on trombone, Elisa on flute, and Bradley, the baritone with a baritone. While without the usual full lush sound, this arrangement gives the score a unique charm, and an all-hands-on-deck feeling to the show. Scenic designer Ursula Bowden has created a fun playground filled with scaffolding, suitcases and crates, around which movement/dance director Brian Sostek playfully arranges the constantly-in-motion cast, and costume designer Rebecca Bernstein's versatile pieces make for easy transitions (at least from this side of the stage).

This show is proof that classic pieces we love, despite some outdated parts, can be updated to feel fresh, modern, relevant, and still worthy of doing. As I tweeted during intermission, I didn't think I could love Pirates more, until I saw this ingeniously deconstructed and re-imagined version. If you're a Gilbert and Sullivan fan you won't want to miss this delightful new interpretation, and if you're not familiar, this show is a great introduction to their genius in an accessible way.

The Pirates of Penzance continues through March 25, click here for more info and tickets.