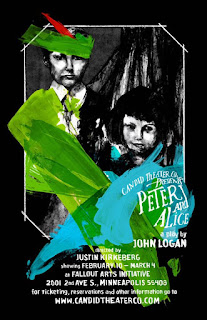 Peter Pan and Alice in Wonderland are two of the most iconic characters in children's literature. Both were inspired by real people, Peter Llewelyn Davis and Alice Liddell, who were children befriended by the authors J.M. Barrie and Lewis Carroll. One would think they'd have a lot in common, and a lot to talk about, both living their lives under the shadow of this iconic image of childhood. History tells us they actually did meet, and playwright John Logan imagines what their conversation was like in the play Peter and Alice. Reality, memories, and imagination all mix together to tell a moving story of the joy and pain of growing up. Candid Theatre Company's wonderful and intimate production of Peter and Alice is playing at Fallout Arts Initiative in South Minneapolis through March 4.

The play begins with 80-year-old Alice meeting the young man Peter before a literary event. She has just sold her hand-written manuscript of Alice in Wonderland, which has placed her reluctantly in the public eye. She and Peter commiserate about what it's like when people find out who they are, and the disappointment they feel at realizing, yes, Peter and Alice grew up, like we all do. And like all of us, Alice and Peter suffered hardship and pain in their lives. They both lost loved ones in WWI, as well as just facing the reality that life isn't like the magical stories, with their talking rabbits and fairies and happy endings.

Peter and Alice is almost like the two-people-sitting-in-a-room-talking play that I love so much, like John Logan's Red (one of my favorites of the genre), also reminding me a little of the imagined conversation between two historical figures in Freud's Last Session. Except in this case, as the two people are talking, we also see their fictional alter egos, and the men who created them. What could be just two people telling stories becomes a lively and dynamic conversation between past and present, reality and imagination. It's very cleverly and beautifully written, with bits of text from both works woven in, and characters from both pieces having conversations with each other. As Alice and Peter discuss the losses and hardships they faced, we empathize with them, and see the other side of the children's stories we thought we knew.

The play is staged in a small room at Fallout Arts Initiative, with just two rows of chairs along one wall where the small audience sits, the story playing out right in front of us, almost close enough to touch. Populated with a desk, some chairs, and shelves filled with books, it looks every bit the charming little bookstore (set design by Elle Zulauf, who also designed the bright and cheery story costumes in contrast to the more subdued costumes of the real-life characters). The balcony and stairs are used only sparingly, as makes sense for this story. Director Justin Kirkeberg balances the real with the fantasy, the charm of the beloved stories with the harsh reality of life. It's a captivating, thought-provoking, sobering 90 minutes.

In the title roles, David Wasserman and Meri Golden both give lovely performances, both as the world-weary and jaded adults, and the children they once were. As their alter egos, Caroline Amos is a breath of fresh air as Peter Pan, bright and energetic, a playful and physical performance, and Heather Burmeister is a picture perfect Alice in Wonderland. Matt Saxe is a boisterous force of life as the Irishman J.M. Barrie, and Rod Kleiss is charming as the befuddled but slightly creepy older man who might just be a little too interested in these little girls. Rounding out the cast is Aaron Henry, who does a nice job with three small but important roles, each very different from the others. All of the actors speak in different varieties of British accents, which adds authenticity to the story (dialect coach Caroline Amos).

Peter and Alice is a fascinating exploration of two characters we think we know, and the contrast between the stories of our childhood and the harsh reality of adulthood. I was completely charmed, and saddened, by this production (continuing through March 4).