"Assassins" by Theater Latte Da at the Ritz Theater 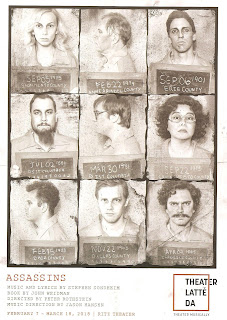 Once again, Theater Latte Da brings us exactly the show we need, right when we need it most (see also Ragtime on the cusp of the election, and last fall's hopeful Man of La Mancha). This time it's Stephen Sondheim's darkly funny and deeply disturbing look at historical presidential assassinations and attempts, and the individuals who perpetrated these horrific crimes. Assassins is not an easy show to watch. It draws you in with the fun carnival atmosphere and the wildly comedic characters, as well as the incredible staging and performances in TLD's production, helmed by #TCTheater's best music-theater director Peter Rothstein. But it will leave you with an unpleasant feeling deep in your gut at the true horror of the crimes the assassins committed, and the world that created them, the world we all live in.

This is my second experience with Assassins, having seen Renegade Theater Company's fantastic production in Duluth a few years ago. As is always the case with Sondheim for me, I get it more the second time around. The musical is a fantastical story about people who tried or succeeded in assassinating a U.S. President, all of them meeting in a sort of carnival/dream/underworld, outside of time and place. Very dark, very funny, and more than a little scary as you get a closer look at people who, for various reasons, felt they needed to commit these horrible acts of violence on the national stage. It doesn't go too deeply into any one story (look to the excellent notes in the playbill for historical context), but it does give you a glimpse into each of these troubled individuals, most of whom I had never heard of before seeing the show, and make you want to know more (my fellow Twin Cities Theater Blogger Gina from The Room Where It Happens recommends the book American Assassins: The Darker Side of Politics).*

Assassins features nine people who made an assassination attempt on eight presidents, four of which were successful. It's an intriguing idea to compare all of their stories, backgrounds, and outcomes, and see what it has to say about politics, celebrity, and mental illness (and why not do it in musical theater form?). Most of the assassins used guns as their weapon of choice, except for one particularly creative individual who tried to hijack a plane to fly into the White House to kill Nixon. The Proprietor sells them their weapons, while a Balladeer sings their stories. The show is bookended by the two most famous assassins, John Wilkes Booth and Lee Harvey Oswald, who is talked into his infamous act by all of the assassins who have come before (and after) him. The culmination of all of the stories told in the show is in this final conversation and its devastating results. In the final moments of the show, the infamous film of the Kennedy assassination plays on a loop on multiple small screens on stage, leaving no doubt that this is a dangerous and scary carnival we've entered.

Theater Latte Da has taken the carnival theme of the musical and ran with it to some fun places. An hour before the show, the audience is welcomed into the onstage carnival where we can buy food and drinks (what carnival is complete without mini donuts?!), play games, and mingle with the cast in costume. I found it to be a little overwhelming and too much stimulation in a small space and preferred to watch it from the comfort of my seat, but it's a fun idea and a fantastic way to get the audience immersed in the world of the play (as is the staging, which has the assassins frequently traipsing through the audience). In addition to the carnival games, the stage features a balcony around the back of the stage with various stairs and ladders leading to it, and portraits of the presidents which are ripped down at each assassination (scenic design by Eli Sherlock). Perhaps most chilling, a bell is rung four times with each successful assassination. The lighting design (by Marcus Dilliard) enhances the warped carnival theme, with red, white, and blue bulbs flashing maniacally, and the whole stage turning red in dramatic moments.

A cool feature of the musical is that it's set in various historical time periods, and also in a world outside of time. Sondheim's brilliant score reflects that, with songs from a variety of styles and eras, as do the costumes (designed by Alice Fredrickson), from Civil War era fancy suits to '70s hippie garb, to some brightly stylized carnival costumes. The mish-mash of musical and sartorial styles keeps the audience on their toes.

Assassins, like all Latte Da shows, is perfectly cast. I could not come up with a better cast if I tried, and in fact many of my favorite actors are gathered in this show, making it a delight to witness. In addition to the assassins, most actors also function as ensemble members, playing other characters in the stories, along with child actor Mario Esteb who is given the chilling final scene.


Assassins is an intense 100 minutes of music-theater. The carnival theme makes it exceptionally fun, but the subject matter of gun violence, desperate people, our insatiable obsession with celebrity, and the never-ending circus of politics is deeply unsettling. Theater at its best makes us reflect on our world in new ways, as difficult and painful as that might be, and Assassins does that brilliantly. Starting with Stephen Sondheim and John Weidman's crazy creative piece, brought to clear and terrifying life by Peter Rothstein and his excellent team and cast.

Assassins continues through March 18. Go for the wild and wacky carnival theme, stay for the biting social and political commentary.


Trigger warning: lots and lots of guns and violence on stage.


*Plot summary adapted from what I wrote about Renegade's production.