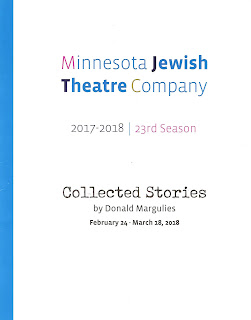 I recently commented that I love two-people-sitting-in-a-room-talking kind of plays. Collected Stories is one of those plays. But rather than one long conversation, it's a series of conversations over six years in an ever changing teacher/student relationship. Written 20 years ago by Donald Margulies, the play does not feel dated (except in character wardrobes and phone references), but rather is a smart and thoughtful exploration of what it means to be a mentor, a mentee, and a writer of stories, yours or others. I found Minnesota Jewish Theatre Company's production, playing now through March 18, to be entertaining, engaging, and thought-provoking.

We meet Professor Ruth Steiner and her student Lisa in 1990, when Lisa shows up at Ruth's eclectic Greenwich Village apartment (where she literally has to "throw down the key"). Ruth barely remembers Lisa from class, but Lisa is beside herself to be in the home of one of her writing mentors. Ruth advises Lisa on her latest story, "Eating Between Meals," and Lisa applies to be Ruth's assistant. Each subsequent scene jumps forward a year or two, as their relationship progresses to eventually be that of colleagues. "Eating Between Meals" becomes Lisa's first published collection of short stories, and then she begins to work on her first novel (something Ruth never did). But the relationship begins to fracture when it turns out the story she's telling might not be her own.

The success of a two-person play is greatly dependent on the two actors and how well they work together. And by that measure, this play is a great success. MJTC familiar face Maggie Bearmon Pistner and MJTC newcomer (but not #TCTheater newcomer) Ashley Rose Montondo are both wonderful as Ruth and Lisa, respectively. Both are very believable and present, and have a believable and changing chemistry as they navigate this complicated relationship. And both have great character arcs - Maggie shows us a writer at the end of her career, watching her life slip away, and Ashley allows her character to grow from an over-eager and awkward grad student to an accomplished and confident writer. It's a lot of fun to watch these people sit in a room and talk.

And what a room! Michael Hoover has once again designed a set that I would like to move into. Bookshelves so tall I don't know how Ruth can access them; homey furniture that reflects an academic who's lived long in this place; books, tchotchkes, papers, and glassware filling every nook and cranny (properties design by Robert J. Smith); and huge windows that actually open. Lighting designer C. Webster Marsh has created some beautiful effects of light coming through said windows, marking the passage of time, and costume designer Liz Josheff Busa has created authentic feeling '90s wardrobes for the two very different characters without being too obvious about it.

This is a play that takes its time. Director Jennie Ward allows her actors to feel the dialogue without rushing through it. Scene transitions are marked with radio reports of various news events of the '90s (Clarence Thomas hearings, Magic Johnson announces he's HIV positive, Johnny retires), although I do wish they were a little quicker to keep the momentum of the story moving (or maybe I just felt this way because I needed to rush to my second show of the day with no time to spare).

People always say, "write what you know." But what happens when you run out of your own experiences and stories? What if someone else's story sparks something in you that you want to explore? Appropriation of stories is something we talk a lot about in theater. We definitely want to give people voice and opportunity to tell their own stories. But what if an established writer wants to use their voice to shine a light on someone else's story that's not being told? Can they do the research, spend time with the people living the story, and do it justice? It's a complicated issue, and I don't know what the answer is, but I do know that transparency and involvement are key. If Lisa had been up front about what she was writing (which she probably would have done if she truly didn't think there was anything wrong with it), the story of this play and these characters might have turned out differently.