"The Royale" at Yellow Tree Theatre 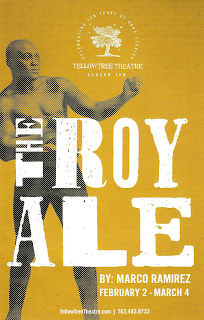 I've learned more about boxing from #TCTheater this month that I ever knew before! But of course, like Illusion Theater's world premiere of Dancing with Giants (closing this weekend), Yellow Tree Theatre's regional premiere of The Royale is about much more than boxing. While Dancing with Giants explored pre-WWII international politics through the story of boxers, including African American heavyweight champion Joe Louis, The Royale takes us back a few decades earlier to explore race relations right here in America through the story of Jack Johnson, the first ever African American heavyweight champion (that's way more boxing words than I ever thought I'd write). The play is sparse in length (not much more than an hour) and words, and almost feels like a dance musical in its rhythmic dialogue and graceful movement. It's a powerful and dynamic experience that flies by in no time.

We meet this fictionalized version of Jack Johnson, called Jay, as he's trying to become the world heavyweight champion, except that the current champ won't fight him because he's black. His wheeler-dealer of a promoter is finally able to secure the fight by promising the opponent 90% of the box office gains. An unfair deal, but Jay just wants the chance to fight. He sets to training with his tough longtime manager and a new sparring partner. Jay basks in the glow of the press leading up to the fight, until the questions start to get ugly, and he starts to receive death threats from ignorant people threatened by equality. Even Jay's sister asks him not to do the fight, for fear of retribution on her family if he wins. But Jay isn't just fighting for sport, he's fighting for something much more important, and the very reasons people don't want him to fight is why he must.

This sounds pretty dry in description but is anything but in this play in constant motion, barely allowing the audience (or the actors) a chance to catch our breath. Director Austene Van, a talented actor recently turned to directing, must be credited for the dynamic feel and pace of the show, and for choreographing the fight scenes. The graceful, powerful, almost dance-like movement of the boxers is truly something to see. Rather than face each other, the boxers stand side-by-side facing the audience, one boxer stamping his feet when a punch lands while the other one flinches. Lighting (designed by Courtney Schmitz) and sound (designed by Andre Newman) add to the tension with perfectly time emphasis for everything from punches to photo flashes, and Katie Phillips' set has turned Yellow Tree's intimate stage into a boxing ring. Well-chosen recorded music, plus one song sung live by the cast, also add much to the storytelling.

NYC-based David Murray returns to the Twin Cities after a year's absence to play Jay (you might remember him from Violet at Yellow Tree, or Theater Latte Da's sublime Ragtime, or as Cinderella's prince at the Children's Theatre in 2016). He impresses with his physicality as much as with the emotional depth of his portrayal, making us feel Jay's range of emotions from frustration, to determination, to a deep need to make things better. Santino Craven (who also choreographed the sparring scenes) matches him blow for blow as his sweet sparring partner, and Charles Fraser is appropriately smarmy as the fight promoter. James Craven's manager is a man of few words, but they all land with the power and gravitas of this veteran #TCTheater actor. Last but not least, Tamala Lacy brings a bit of the feminine into the boys club, with a lovely performance as Jay's sister.

One thing that particularly struck me was Jay's description of his sister admiring the posters of beautiful women outside of the town drugstore when they were kids, and the awful feeling when she realized, and internalized, that none of them looked like her. I couldn't help but think of the huge success of the new movie Black Panther this past weekend, and how movies like this give little girls and boys with dark skin and tightly curled hair images of strong, beautiful, heroic, fully rounded people who look like them. That's exactly what Jay was fighting for.

Every element of this production is so well thought out with incredible attention to detail, and proves that you can say a lot with few words and a short amount of time. The Royale is another fine achievement for my favorite theater in the 'burbs. Continuing through March 4.