"Ideation" at the Gremlin Theatre 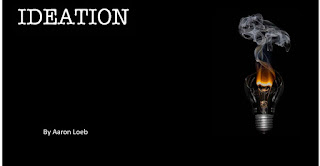 Just because you're paranoid doesn't mean they're not out to get you. The characters in the play Ideation are definitely paranoid, entertainingly so, but whether or not someone is out to get them is still a question mark at the end of the play. The regional premiere of Ideation by Gremlin Theatre is a taut, thrilling, engrossing, and funny 90 minutes of work colleagues going down a paranoid rabbit hole, and it'll make your head spin, in the best way. Rarely has my logical math left brain side been so engaged and excited at the theater as I tried to follow these characters through their hypotheses and arguments and conclusions. Theories and algebraic equations are written on the white board, only to be erased and written over by a new theory. By the end you don't know what to believe, and neither do the characters in the play, but it sure is fun to watch their wheels spin.

Walking into the Gremlin's new-ish space at Vandalia Towers (it opened a year ago), the accurate recreation of a typical office conference room gave me that feeling of boredom and dread that such work meetings engender. But trust me, what unfolds is way more entertaining than what usually happens in a room with an oval table surrounded by office chairs, a fake plant in the corner, drab gray industrial carpeting on the floor, a large white board, and little side table with water and snacks. A very familiar environment for anyone who works in an office, but hopefully not a familiar scenario (set and lighting design by Carl Schoenborn).

Because in this office, the high-powered employees... well it's some sort of crisis management firm. They've been brought together to work on the super secret Project Senna, the details of which slowly become clear over the first several minutes, which I won't spoil here. Let's just say one of the rules is don't use the N-word, and it's not the one you think.

The fun begins when these employees, who are too smart for their own good, start to question what they've been told and what this project actually is. They start to posit theories, and then attempt to prove or disprove them (hence the repeated scribbling on the white board). They also start to distrust each other, thinking that others in the group know more than they do, and when one of the group seemingly disappears, suspicions grow exponentially.

The play is really smartly written by playwright Aaron Loeb, and also quite funny, with some emotional details that make the characters more human (as well as a few movie references). Director Brian Balcom keeps the pace spinning but not out of control, as the paranoia increases even into a hilarious fight that includes throwing post-it notes. The terrific five-person cast includes up-and-coming young actor Ben Shaw as Scooter the intern, the strong (as always) Katherine Kupiecki as boss Hannah, Artistic Director Peter Christian Hansen as the egotistical Brock, charming newcomer Nikhil Pandey as Sandeep, and a perfectly cast Brian P. Joyce as Ted aka Papa Bear. It's great fun to watch them work together as a group and as pairs or smaller groups.

The word ideation is defined as "the formation of ideas or concepts." What starts as a typical workplace brainstorming session turns into something much more in this smart, funny play that is a cross between dark comedy, psychological thriller, and horror story. We have good reason to be paranoid these days, and it's healthy to question what we're told. But it's also wise to remember the unlikelihood of Scenario 1D, and realize that sometimes, maybe most of the time, V does equal 1. Or does it?!

Ideation continues at Gremlin Theatre through July 29. Now that it's summer, check out the food truck schedule at Lake Monster Brewing right next door for dinner and beer and a show (and remember you can bring their beer into the theater).