"Hand to God" at Jungle Theater 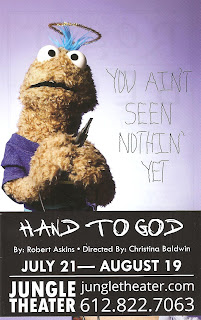 Hand to God is a little like Avenue Q, but with less singing, more frequent cursing, and more graphic simulated puppet sex. The 2015 Tony nominee for best play is having its regional premiere in a fantastic production at Jungle Theater, and if you don't mind being a little uncomfortable at the theater (you shouldn't, it's good for you), it's well worth braving the construction, traffic, and parking headaches that come with a trip to Uptown to see this funny, irreverent, and sad little play.

Hand to God takes place in a church basement. Recent widow Margery is teaching a puppet class, clinging to it and the church as the only thing getting her through her grief. The only students are Margery's son Jason, the rebel Timothy, and the sweet Jessica, who all have different reasons for being there. Jason is grieving as well, and has taken to using his puppet Tyrone as the voice of the grief and rage that he is unable to express himself. Jason is sweet and meek, and Tyrone is the opposite - aggressive, foul-mouthed, cruel, and violent. It almost seems like a healthy way for an adolescent to express unexpressed feelings, until it isn't anymore. Tyrone claims to be the devil, scaring the other students, Jason's mother, Pastor Greg, and even Jason himself. Everyone knows this is Jason's cry for help, but do they have the tools and resources to help him before it goes too far?

As sweet Jason and evil Tyron, Riley O'Toole gives a genius performance unlike anything I've seen before. I'd like to nominate him for a TCTB Award, but I'm not sure what category - comedic? Dramatic? A special category for "with puppet?" Riley's performance broke my heart, made me laugh, and shocked me, sometimes all in the same breath. There are so many things going on in his performance (it probably helps that he's played this role before); he's controlling the boy Jason's physicality and facial expressions, the devil puppet Tyrone's movements of body, face, and limbs, and he's also doing both voices, several times having a two-way conversation alone onstage and doing it so well that Tyrone often feels like a separate living breathing thing. I can't imagine how many hours of practice go into making it look as natural and effortless as Riley does. Artistic Director Sarah Rasmussen notes in the playbill that "Riley O'Toole was born to play this role." I don't know about that; he's young, I think we'll discover many roles that he was born to play in the future. But this play does not work if the audience doesn't empathize with the sad, scared, lonely little boy behind the angry puppet, and thanks to Riley's performance, we do, and it does.

The rest of the ensemble is pretty fantastic too, and director Christina Baldwin must be credited for helping to imbue this kinda gross story with a real heart and truth that keeps it from being just gross for gross' sake. Eric Sharp really digs into the bad boy persona of Timothy and is so much fun to watch. C. Michael Menge, making their welcome #TCTheater debut, brings a kindness and realness to Jessica, who wants to help her friend despite the gross things he says to her (also with some pretty great puppet manipulation). Tracey Maloney is empathetic as the struggling mom Margery, who also makes some pretty poor choices, but in the end loves her son and wants to help him, even if she doesn't know how. And Kris Nelson made me feel for good-hearted Pastor Greg, even if he does inappropriately and unsuccessfully try to hit on Margery (which is even funnier when you know that Tracey and Kris are married in real life). All of these characters have a sadness somewhere beneath their bad behavior, beautifully portrayed by the cast, so that even when they do terrible things (and they do), you can't help but feel for them.

The typical church basement is perfectly represented in Chelsea M. Warren's very detailed set - wood paneling, stairs down to the floor, inspirational posters, mini stage, folding chairs, toys and stuffed animals galore. It ingeniously converts to the pastor's office when a wall is moved across the stage, revealing the office on the other side. Chelsea also designed the cute and scary puppets, with Masanari Kawahara as puppeteering consultant (and puppet intimacy director??). Sarah Bahr's costumes are colorful, cute, and eclectic, providing a nice juxtoposition to the not-to-sweet words and actions of the characters.

This play probably gets a lot of attention for the grossness of the language and actions of some of the characters. But I don't think playwright Robert Askins uses all that foulness just to be shocking. I think he uses it to express the very real feelings of these characters that don't have the tools to express themselves any other way. The play ends in a call for help, which this family desperately needs. Today's world is filled with too many tragic stories of troubled kids and in-over-their-head parents who often don't get the help they need before something worse than a little puppet violence happens. Jason is fortunate that his cry for help is heard.

The hilarious, shocking, and not a little sad Hand to God continues at the Jungle through August 19.