"She Loves Me" at DalekoArts 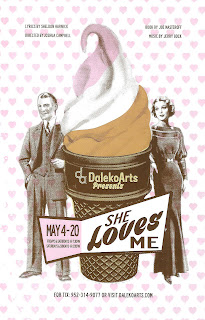 The second of three #TCTheater productions within a year of the delicious and timeless 1963 musical She Loves Me is now playing on the far Southern edge of the seven-county metro area, at DalekoArts in New Prague. Based on a 1937 Hungarian play, the basic story has been told in multiple iterations, including the 1940 Jimmy Stewart movie The Shop Around the Corner, and the 1998 Tom Hanks/Meg Ryan remake You've Got Mail. But She Loves Me tells it in musical form, which IMO is always the better way to go. The current popularity of the show is perhaps due to the successful 2016 Broadway revival (broadcast live via BroadwayHD), but whatever the reason I'm glad of it. I have fallen in love with this sweet and funny show, first through Lyric Arts' production earlier this spring, then through listening to the 2016 cast recording, and now through DalekoArts' charming production. They employ a smaller cast and band on a much smaller stage (I'm not sure there are any tinier stages in #TCTheater than Daleko's), and blissfully no body mics, which only makes the experience more sweet and intimate. She Loves Me plays for one more weekend only; if you're in the Southern Metro you should definitely check out what's going on in New Prague.

In case you haven't seen any of the iterations of this charming story, here are the basics. Two co-workers at a parfumerie in Budapest have such a contentious relationship that you know deep down they really like each other. As it turns out, they've both been writing to an unknown someone, connected via a "lonely hearts" ad in the paper. Georg finds out first that they've actually been writing to (and falling in love with) each other, which causes him to be a bit nicer to Amalia, so that when she finally learns the truth, she realizes she knew it all along. It's a sweet love story between two strong people who know what they want and won't settle for less. We the audience know that they're perfect for each other, which makes that final resolution so satisfying.*

This cast is small but mighty. Just ten members in the ensemble (by contrast, Lyric Arts had 16, the recent Broadway revival 18), most of them doubling roles in the cafe scene. They've also employed a few gender switches that work great. Jacklyn Grigg plays the young bike messenger Arpad, in a sort of Peter Pan kind of way, and the role of the headwaiter, usually a man, is here hilariously played and gorgeously sung by Suzie Juul (because if you've got Suzie Juul in your cast, you definitely want to have her sing as many songs as possible). She also plays a customer, along with Alice McGlave and Mary Palazzolo (who also has her comic moment); the trio providing some lovely harmonies. Other highlights in the ensemble include Rodolfo Nieto at his dreamiest as the charming rogue Kodaly, Jaclyn Juola vamping it up as Ilona, David Beukema as an alternately grumpy and wistful Mr. Maraczek, and Ryan Lee as a steadfast clerk.

Which brings me to our fantastic leads. It's wonderful to see Whitney Rhodes in a lead role; her Amalia is so relatable and empathetic, hopeful and a little world-weary, with an effortlessly beautiful voice. Bobby Gardner is also great as Georg; funny and sweet in an everyman sort of way. These are two likeable people that you can't help but root for and want to see happy.

With direction by Joshua Campbell and choreography by Lauri Kraft, the tiny stage never feels crowded. Sydney Achler's efficient scenic design makes great use of the space, with a sweeping stairway to an overhead balcony and perfume counters that neatly slide back into place when not in use. Sara Wilcox's lovely period costumes complete the look. And last but not least, music director Anthony J. Sofie makes this dreamy score sound great, leading the small but worthy four-piece offstage band (despite how the program reads, I'm certain I heard a flute and clarinet). And it must be said again - my favorite way to listen to musical theater is unamplified. I applaud Daleko for going that route and letting the beautiful voices of the singers reach our ears with nothing in between but air.

DalekoArts begins their seventh season this fall, and I'm kind of mad at them for planning such a great season (including the hippy happy Godspell, an original holiday show, the enthralling science-romance two-hander Constellations, and the inventive Peter Pan prequel Peter and the Starcatcher). I may have to make that long drive out to New Prague more than once next year.

She Loves Me continues through May 20, with tickets starting at $18.


*Plot summary borrowed from what I wrote about Lyric Arts' production.