"The Good Person of Szechwan" by Ten Thousand Things at St. Paul's ELCA 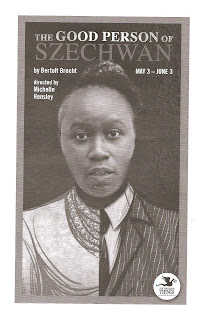 Michelle Hensley, retiring Artistic Director and Founder of Ten Thousand Things, is a gift. A gift to theater, a gift to Minnesota, a gift to the world. She taught us a new way to do theater, a new way to experience theater, one that considers who the audience can and should be, which is everyone. Read her book All the Lights On if you want to know more about it, or go see her beautiful swan song The Good Person of Szechwan (continuing through June 3), which is also the first play that TTT ever did nearly 30 years ago when Michelle started it in California. We've been lucky enough to have TTT as a vital part of the #TCTheater community for 25 years, a tradition that will continue after Michelle's retirement under the leadership of new Artistic Director Marcela Lorca. One can only hope that all of the artists and audience members she's worked with and influenced in those years will continue on this tradition of inclusive, accessible, imaginative theater that is unlike anything else.

The last time I saw The Good Person of Szechwan, it was 3+ hours long, which is longer than anything ever needs to be. But this is Ten Thousand Things as directed/adapted by Michelle Hensley, who, after nearly 30 years, is an expert at cutting out the extraneous bits and paring down a piece of theater to it's truest heart. So the story is succinctly, fully, playfully told in a little over two hours, and it's a story with a lot of heart. The Good Person of Szechwan is like a gritty fairy tale (which is what TTT does best). Three gods descend to earth in search of one good person. They find her in the city of Szechwan, a poor but kind-hearted prostitute named Shen Te, who gives the gods a place to stay even though she doesn't have much. When she complains that it's difficult to be good and still pay the bills, they reward her with 1000 silver dollars in the hopes that easing her money troubles will free her up to do more good. But things don't quite work that way down here on earth. Shen Te buys a tobacco shop, but soon finds herself taken advantage of by friends, neighbors, and lovers. She is forced to invent a male alter ego Shui Ta to protect herself. The play asks interesting questions about what is good, what sacrifices do we make to do good (no good deed goes unpunished), and how can we do good while still demanding respect?*

Ten Thousand Things is in the business of creating magic, through the adaptation and direction that clearly tells the story without dumbing it down for their non-traditional (and traditional) audience; the musical soundtrack  that helps frame the story (composed and performed by Peter Vitale on a multitude of instruments and noise-makers); the sparse and whimsical set pieces (designed by Stephen Mohring); the charming, elegant, color-coordinated, deconstructed, piecemeal costumes (designed by Trevor Bowen); and of course, some of the best actors working in #TCTheater today that the audience has the pleasure of observing up close and personal with "all the lights on." All of these elements combine to take the audience on a joyful ride of the imagination. Pure magic.

Our Good Person is played the inimitable Joy Dolo. She's as funny, personable, and good-natured as Shen Te as she is fierce and demanding as Shui Ta, but she really shines in several asides (neatly cued by Peter Vitale's sound design) when she pours her heart out directly to the audience. As the pilot that she falls for, Tyson Forbes is so good at being bad. So vulnerable and charming one moment that you can't help but fall in love with him, then turning around to reveal a total slimeball who does not treat our heroine well. The rest of this incredible ensemble (Elise Langer, Christina Baldwin, Harry Waters Jr, Karen Wiese-Thompson, Max Wojtanowicz, and Sun Mee Chomet) play multiple characters, all distinct and well-defined and just a joy to watch.

I saw my first Ten Thousand Things show in 2010, shortly before I started this blog. I'll never forget the wonder of that first experience - a totally stripped down version of the usually big and splashy musical My Fair Lady. I haven't missed a TTT show since, and I regret all the shows that I missed out on prior to that. I'm so grateful to Michelle Hensley, the artists she's worked with and mentored, and the community she's fostered through her work. As she moves on to what I'm sure is something else really great, she will be missed but not forgotten, and her legacy will continue anywhere artists and audiences come together with open hearts to make the world a better place, at least for a little while.

*Plot summary borrowed from what I wrote about Frank's production a few years ago.