"An Enemy of the People" at the Guthrie Theater 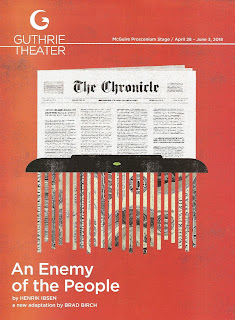 Whistle blowers. Leaking confidential information to the press. A scientist who isn't believed. A politician covering the scientific truth with an invented truth of his own. An Enemy of the People feels like a ripped from the headlines play, but in reality it's a 130-year-old Norwegian play, although with a new adaptation that has been updated for the Guthrie's production, allowing for the inclusion of timely phrases like "alternative facts." But the core of the story is the same: science vs. politics, truth vs. fabrication. In a gripping 90 minutes, the story unfolds and the scientist's life unravels, all while trying to do "the right thing." A fantastic cast of local and national talent, a gorgeous crisp, clean, Scandinavian design, and timely and relevant themes make for another great night at the Guthrie.

The story opens on a party at the house of Tom Stockmann, a scientist who recently gave up his tenure at a university to become the director of The Springs, a resort that utilizes the natural hot mineral water from the mountains above the town. But Tom is nowhere to be found, and when he finally does arrive, he's flustered. He's just found out that the water from the springs is poisoned, and he believes the only thing to do is to shut down The Springs while the problem is fixed. But his brother Peter, the board chairman and town Mayor who based his campaign on the revitalization of the economy that The Springs provides, wants to take a different tack. One that's more cautious and less transparent, and doesn't disrupt the delicate balance of town politics. Tom tries to enlist the help of the local paper to expose the truth, but that doesn't go well either. Tom nobly clings to his commitment to the truth as everything falls apart around him.

The excellent eight-person cast is a nice mix of local and national talent, exposing us to great new faces amongst the familiar ones. Newcomer Billy Carter is hugely empathetic as Tom, making you believe in him and his cause. Ricardo Chavira, taking a break from his busy TV schedule (Desperate Housewives, Scandal, The Santa Clarita Diet, and most recently the final of Rise) to come back to the Guthrie, is a great foil for Tom, a charming politician with an agenda of his own, stopping at nothing to achieve it. #TCTheater favorites Mo Perry and J.C. Cutler play the journalists, who also have their own agenda in what story they choose to tell. The always wonderful Sarah Agnew is Tom's supportive wife Kate, but spends more time mentoring a young writer, played with depth by Zarif Kabier. Rounding out the cast are Zachary Fine as Kate's brother and Christian Bardin, adding a bit of comic relief as the Stockmann's rebelious (and often drunk) daughter, with a bit of desperation hiding behind the bravado.

The massive and massively cool set (designed by Merle Hensel) reminds me a little of Angels in America, currently on Broadway, with it's revolving rooms. Each is framed on the outside by pale wood, like the outside of a sauna, which when rotated towards the front reveals a sparse interior with clean, cool lines and Ikea furniture. Some scenes take place in these confined spaces, some in the open spaces between the rooms, with a backdrop of a mountain looming above them. Even scene transitions are interesting to watch as characters wander amongst and between the moving rooms, with smart and interesting direction by Lyndsey Turner, and chic modern costumes by Brenda Abbandandolo.

It's pretty remarkable that a play written so long ago in another country can be reworked to reflect our current society. There are constants in the human condition, in any society, and dealing with half-truths, lies, and liars is one of them.

An Enemy of the People continues in the Guthrie proscenium theater through June 3.