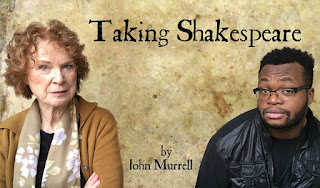 I wish I had had a professor like the one in Taking Shakespeare, maybe I'd have a better appreciation for the Bard. As it is I struggle the first time I see a Shakespeare play, as does the student in the play. But by the end he seems to really get it, and like in any good teacher/student relationship, the teacher also learns from the student. In Gremlin Theatre's staging of the new(ish) play by John Murrell, directed by Artistic Director Peter Christian Hansen, we get to watch this relationship play out in the hands of two talented actors (a beloved veteran and an exciting newcomer). It's an exploration of not just Shakespeare, but the changing phases of life, and whatever one's passion happens to be.

The entire play takes place in the unnamed Prof's apartment, filled with books and a constantly brewing coffee pot. Murph shows up for tutoring through his first year Shakespeare class, arranged by his mother, the Prof's former student and Dean of Humanities at this unnamed East Cost school. The Prof is doing it as a favor, and as we find out later, as a last ditch effort to save her job at the university. She's reluctant at first, until she finds out Murph is reading Othello, her favorite play, or as she calls it "my Shakespeare." We then follow them through their weekly meetings for a little over a month. As they work their way through the play, it brings up things in both of their lives (as good art does), and the two form an uneasy and unlikely friendship. They both learn not just about Iago, Desdemona, and Othello, but about themselves, and what they want to do with their lives, she at the end of her career and he at the beginning of his adulthood.

I love two-person plays (see also Gremlin's most recent play A Steady Rain) because it really allows us to get to know the two characters, and it feels like one long conversation. But it really hinges on the casting to make it work, and it does here. Linda Kelsey, veteran of stage and screen, is always wonderful to watch. She's so present and believable in her depictions of her characters. She's well-matched in John A.W. Stephens (so charming in Transatlantic Love Affair's The Privateer last fall), and the two have a nice and playful rapport. And their delving into and delivery of some of the lines in Othello make me want to see it again (even though I found it too long and a bit tedious last time I saw it). Especially this line, which the Prof says repeatedly, each time revealing more of its meaning: "thou hast not half the power to harm, as I have to hurt."

I've realized I enjoy listening to people talk about Othello for 90 minutes more than I enjoy watching Othello for three hours. Whether you love Shakespeare's plays, or avoid them, or fall somewhere in between, Taking Shakespeare might make you appreciate the Bard a little more, as well as the way people can connect and find meaning in art (continuing through June 3).