"Under this Roof" by Full Circle Theater at the Guthrie Theater 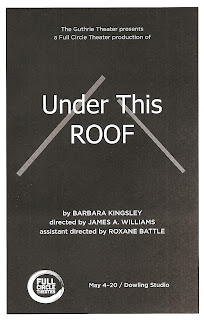 Currently staging just their third production, Full Circle Theater is new to the #TCTheater scene, but the founding members are certainly not new to the community. Co-Artistic Directors Rick Shiomi and Martha B. Johnson, along with Core Artists Lara Trujillo, James A. Williams, and Stephanie Lein Walseth have combined their experience and talents "to produce heartfelt, groundbreaking theater that artfully addresses issues of diversity and social justice for 21st century audiences." The new play Under this Roof, written by veteran actor of local and national stages Barbara Kingsley, fits well with this mission. It's a simple story of friendship and family, with moments of lyrical beauty mixed with the mundane stuff of everyday life. Directed by Full Circle artist James A. Williams and featuring a solid four-person cast, it's a realistic and ultimately hopeful look at the challenges that life throws at us.

The setting is "June 1948, in Cleveland's economically depressed Central neighborhood." The characters are married couple Mamie (Yolande Bruce) and Raymond (Brian A. Grandison), who moved north years ago from Alabama to make a better life for themselves. The situation is that Raymond is laid up on the couch after falling off a roof that he was fixing (with more to that story we will later learn). Since he's currently unable to work, Mamie can't afford to take a day off from her job cleaning a rich white lady's home to care for him, so she asks her nurse friend to send over someone who can stay with him while she's gone - make sure he takes his meds, feed him, and whatever else he needs. The conflict is that they were expecting a young black girl, but what arrives on their doorstop is what appears to be a well-to-do married white woman (played by Laura Esping). Mamie is skeptical to say the least, but there's no time to make any other plans, so she leaves Raymond under Bessie's care, with a list of chores.

Bessie is incredibly efficient and knowledgeable about caring for the sick, but she's not a nurse. Which is about all that she'll say about herself and her background. Raymond resists at first, but soon realizes Bessie knows what she's doing and the two form a tentative rapport, that's shattered when Mamie comes home to find both of them fast asleep. She throws Bessie out, but that doesn't stop her from showing up again the next morning. We soon find out the reason for Bessie's skill, and her need for money, both of which are related to her son Mason (Nathan R. Stenberg) who shows up unexpectedly. And while it's not fair to say this foursome become best friends, they do come to an understanding, and reach out whatever helping hand they can to each other. Each one of these characters has challenges to face, that are not solved by the play's end, but it's clear they're going to keep going.

The four characters are all specifically drawn by the playwright and beautifully embodied by the cast, making them believable and real. The design also feels very real. Scenery and property designer Michael Burden has created a home that feels lived in but well cared for, with details that continue beyond doors to areas that are barely seen. The lighting is important to the story as Raymond is sensitive to light and barks orders about which lights can be on and which curtains must be closed, and lighting designer Thomas Barrett makes it all work smoothly, including soft lighting when a character is telling a story that enhances the effect of it. Amber Brown's costume design, from Bessie's neat and precise dresses, to Mamie's maid uniform, to Raymond's rumpled pajamas, complete the look of this 1948 Cleveland home.

Under this Roof continues through May 20 in the Guthrie's Dowling Studio as part of the Level 9 Initiative, with all tickets just $9.