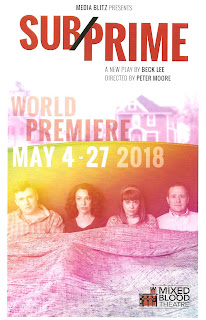 In a note in the program for his new play Sub/prime, NYC playwright Beck Lee states that local director Peter Moore told him after a reading, "You haven't found the humanity in these people yet. They are not honest, vulnerable people... they're stick figures." I shudder to think what the early version of this play was like, because these four Minnesota tourists on vacation in NYC are the most miserable horrible people I have ever seen on stage. I kept waiting for some sort of redemption, where someone learns a lesson, or gets there comeuppance, or something. But it never came. Part of me thinks this play is one big prank on Minnesotans; that the playwright hates Minnesotans and tourists and this is his big joke to show how horrible we are. Either way I was not laughing; I've rarely been so offended at the theater.

The entire play takes place in a hotel room in NYC (beautifully and crisply designed by Joe Stanley), where two couples and Linden Hills neighbors Cartright and Kurt (Jen Burleigh-Bentz and Charles Fraser) and Sydney and Brian (Bonnie Allen and Dan Hopman) are on vacation. It soon comes out that both are having financial troubles, as well as other troubles in their lives and marriages. It also soon comes out that all of them are horrible people, the worst being Kurt, who is a racist misogynist disgusting person. The kind of person that's so racist that he takes offense when his wife suggests his ancestors might be Irish because that's not WASP enough for him, and counters with, "imagine if you found out you were Jewish!" Some of the horrible actions committed or referred to by these characters include rape, drugging women without their knowledge, domestic violence, making fun of the disabled, and referring to people with mental illness as not normal. All with no sense of remorse or awareness of wrong. The alcohol fueled evening gets worse when the husbands decide to go buy drugs in Central Park, and the the best thing that happens in this play is Kurt getting arrested. Cartright asks the Puerto Rican bell boy (Jorge Quintero), who told them where to buy drugs (another offensive stereotype), "what happens to white Midwestern men when they go to prison in NYC?" The real answer is they don't, and these characters' cluelessness of their privilege, despite being unable to pay for their overextended lifestyle, is astounding.

The play takes place in 2008 during the recession (which you can tell because everyone has flip phones), so maybe the play is trying to say something about how this financial crisis led to the situation we're in now (because you know these people will vote for Trump, for sure Kurt does). But without any sort of conclusion that speaks to this, it feels like just a celebration of bad behavior, something I cannot stomach anymore. There's too much of it in real life and on the news.

I have to give credit to the actors, particularly the ones playing the couples. They're all local actors whom I've seen on stage many times and whose work I admire, and who completely commit to the unlikeability of the characters. Especially Charles Fraser, who's so full on believably disgusting that I hope I don't see him in anything until the memory of the awfulness of Kurt has a chance to fade from my memory (one can only hope that it's soon).

It's not like there weren't parts that were funny, and parts that were true. But my overall impression was one of unchecked ugliness with no redemption. It's not the kind of theater that I, or the world in my opinion, needs right now. Maybe if things were different in the real world it would play better. Or maybe I just missed the joke.

Sub/prime continues at Mixed Blood Theatre through May 27 (please note that it is not produced by Mixed Blood, and doesn't feel like a play that they would ever do, especially on the heels of their stellar 2017-2018 season).