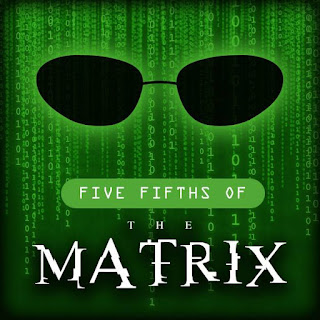 The first Minnesota Fringe Festival event of 2018 is here! The first one I attend anyway (the lottery happened a few months ago, choosing the lucky companies that get to perform in the festival). The annual "Five-Fifths" fundraiser is when they take an iconic movie, split it up into five parts, hand it over to five Fringe companies, then put the five parts back together again. To say that the end result bears little resemblance to the original goes without saying. But it's great fun, and really gives you a taste of what Fringe is - a display of a wide array of creativity. Mark your calendar for August 2-12, and in the meantime find out how you can get involved (by volunteering, donating, or attending other pre-festival events) at the Fringe website.

This was my fourth time attending Five-Fifths, but the first time I haven't seen the movie in question. That's right, I've never seen The Matrix. While I certainly missed some of the jokes (I had several moments of - why is everyone laughing?), the short description in the program gave me the outline of the plot, and it doesn't really matter anyway. I enjoyed all of the performances, which included:

My favorite moments of the show include:
See you at the Fringe!