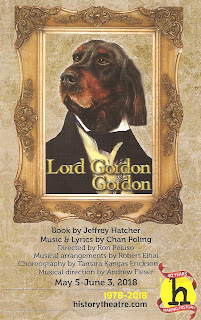 The creators of History Theatre's smash hit new original musical Glensheen return for their second collaboration with the theater dedicated to creating new work mining the area's rich history - the fun and farcical (yet somewhat factual) Lord Gordon Gordon. I didn't love it as much as I did Glensheen (maybe because I'm not obsessed with this story like I am the story of the wealthy heiress serial killer arsonist), but it has that same sense of fun and wit combined with great original music that one comes to expect from a Hatcher/Poling show. With an excellent cast, plenty of Minnesota and Canada jokes, and clever theatrical tricks, it makes for a fun evening at the theater, laughing about the truth-is-stranger-than-fiction antics of a con man and his marks right here in Minnesota almost 150 years ago.

Not much is known about the historical figure, which, as the authors note in the program, gives them plenty of leeway to flesh out the story and characters. The story begins when Lord Gordon Gordon arrives in Minnesota in 1871, promising to buy a bunch of land and settle it with "Sixty Thousand Scots" (a fun song in the show). After several prominent Minnesotans give him money, he skips town and goes to New York to swindle "the wolf of Wall Street" Jay Gould, with the help of his friend and lover Sarah Belden. It turns out Sarah might actually be swindling Milord along with her husband William, or maybe she's working for herself only, or maybe she's a double agent. But the end result is that Gordon Gordon is put on trial and flees to Canada when released on bail, where the Minnesota businessmen kidnap him. When they're stopped and arrested at the Canadian border, Minnesota almost declares war on Canada to release them (that actually happened), until a deal is worked out.

The creators give the fictional Lord Gordon Gordon a happier ending than the real one (a la Wicked), which is a bit disappointing. I tend to prefer musicals with less happy but more realistic endings, and I'm the annoying person who always says - but that's not what happened in real life/the book! Maybe another reason why I didn't love Lord Gordon Gordon as much as Glensheen is that it falls into the musical theater cliche of having the whole show revolve around a romance, with a happy ending. I'm not sure the story needed a romance, and I'm not sure Lord Gordon Gordon deserved to (spoiler alert!) get way with his crimes and live happily ever after. But based on the crowd reaction on opening night, it certainly is a crowd pleaser, especially with all of the local references and humor that we Minnesotans love!

Mark Benninghofen embodies Lord Gordon Gordon in all his charm and trickery, and Adam Qualls is just as charming and tricky, if a bit more sinister, as the valet who's more than just a valet. Jennifer Baldwin Peden is wonderful as always as Gordon's lover Sarah, and sings like a dream, with a couple of gorgeous solos. The ensemble members (Eric Morris, Gary Briggle, Jennifer Maren, Jim Ramlet, Katie Bradley, and Randy Schmeling) play multiple roles, all at full tilt, with special credit due to the two women who gracefully transition from the thankless stereotypical roles of wives and prostitutes to more fun and atypical roles like Canadian Mounties.

A really clever and interesting element of the production is the use of four SPCPA students (Callie Dotcherman, Sedona Wissar, Andrew Didenko-Gamart, and Nathaly Abraham) dressed in black and wearing masks, referred to in the program as "the dancers," but which remind me of Japanese Kuroko. More than mere stagehands who deliver props to the right place at the right time, they're almost always on stage, posing quietly in the background, adding texture to the story. Since the incredibly detailed retro hunting lodge set (designed by Eli Sherlock) never changes, the Kuroko help set the scene by bringing out a small set model, pouring water into a bucket to represent falls, or dragging a train across the floor. It's a playful and inventive touch.

Director Ron Peluso makes great use of the massive two-level set, which has many doors and openings from which ensemble members can deliver lines. So many that at times it's hard to know where the voices are coming from. Tamara Kangas Erickson has choreographed numbers to fit the varied styles of Chan Poling's score (played by a five-piece onstage band under the direction of Andrew Fleser). My favorite bit of choreography is the solo tap number by Katie Bradley, which feels like a conversation.

Lord Gordon Gordon is a big musical theater show, with lots of moving parts and pieces, and the cast and creative team pull it off very well. It's a fun summer blockbuster kind of musical that will take us into early June, when the stage again transforms into that beautiful, stately, and mysterious mansion on Lake Superior for the fourth run of Glensheen in July.