"In Conversation with Rainn Wilson" at the Guthrie 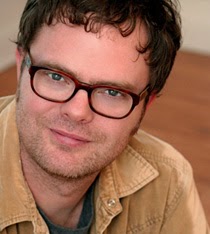 It's fairly obvious that I'm a huge theater fan.  But I also watch way too much TV, and I love it when those two obsessions intersect, as they did at the Guthrie today.  Before becoming famous as Dunder-Miflin's assistant (to the) regional manager Dwight Schrute on The Office (one of my favorite TV comedies ever), Rainn Wilson was a theater actor in New York and around the country, including right here at the Guthrie.  His busy TV and movie schedule prevents him from coming back to the Guthrie to do a play (for now, anyway), but he was kind enough to spend the weekend in Minneapolis and share some of his experiences acting in theater, TV, and movies.  Guthrie Artistic Director Joe Dowling conducted an informal interview of Rainn on the deck of the H.M.S. Pinafore on the thrust stage, followed by a question and answer session.  Rainn was charming, funny, and spontaneous as he interacted with the audience, and the two men obviously have a lot of respect for each other.﻿
﻿﻿ ﻿
Joe's questions led Rainn through the chronology of his career as an actor, beginning with earning an MFA from NYU and traveling around the country doing Shakespeare with The Acting Company (which partners with the Guthrie and presented The Comedy of Errors and Romeo and Juliet here in January).  Rainn first appeared at the Guthrie in 1996 in Philadelphia, Here I Come!, which he called "a singular moment" in his life and career.  His favorite plays are ones in which there's no limit to how funny and how tragic it can be.  He returned a few years later for The Importance of Being Earnest and The Venetian Twins (which included a planned "stabbing" of an audience member, followed by an ambulance driving onto the stage).
Rainn worked as a struggling actor in NYC and around the country for about ten years.  He had other odd jobs during that time, including owning a moving company called "The Transcendent Moving Company" with the slogan, "A man, a van, and a sense of higher purpose."  He moved from New York to L.A. when he saw that actors with a TV credit on their resume were more likely to get cast at some theaters.  He thought he'd do a few TV roles so that he could return to theater and have an easier time getting roles.  Turns out he had some early success in L.A., including bit parts in the movies Galaxy Quest and Almost Famous.  But then he didn't work much for a year and half, so he returned to what he loved.  He did Taming of the Shrew at the Old Globe in San Diego, and did "what he does best" - crazy, hammy comedy using every trick in the book to get laughs.  He had a great time, and upon returning to L.A. he started booking roles in TV and film.  He was cast as apprentice mortician Arthur in HBO's brilliant series Six Feet Under (starring native Minnesotan Peter Krause), which changed his life and eventually led to his role as Dwight on The Office.  Before he got the role he had seen the original British version, calling it "a revelation" because of, among other things, the awkward pause and the way they used the camera as another character.
Rainn also talked about a couple of other projects he's involved in; causes he's been able to support and promote because of his celebrity status.  He created the website (and companion book) Soul Pancake - a way for people to grapple with life's big questions in a way that's cool and accessible for young people.  Rainn and his wife (writer Holiday Reinhorn, who was in the audience) also work with the charity The Mona Foundation, "non-profit organization that supports grassroots initiatives focused on education and raising the status of women and girls in the US and abroad."  He spoke about his experience teaching the arts to adolescent girls in Haiti as one example of the foundation's work.  It's quite obvious that in addition to being a talented stage, film, and TV actor, Rainn is also a pretty cool person.
Rainn had great things to say about his time at the old Guthrie and the new facility, and commended Joe Dowling's leadership in bringing it to life (even if he did compare him to the Lucky Charms Leprechaun).  He also joked about the annoyance of the thrust stage and having to include the people on the sides.  There were a few people sitting there, and he directed them to other open seats so that he wouldn't have to worry about them.  He's very funny and quick-witted (despite never having done improv or stand-up) and would go off on tangents or get distracted by things or people in the audience.  He gamely answered many questions from the audience, everything from audition tips to "do you hang out with your co-stars."  Rainn ended the afternoon by encouraging everyone to support the Guthrie and local theater, a sentiment with which I heartily agree!