"The Big Lowdown" on the streets of Lowertown St. Paul, by Bedlam Theatre and Live Action Set 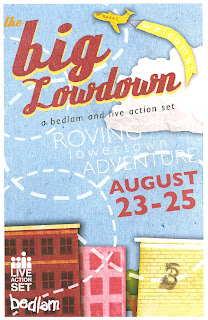 I had an interesting new theatrical experience last night. It's called The Big Lowdown and it's put on by Bedlam Theatre and Live Action Set on the streets of Lowertown. Rather than sit in a theater and be entertained by what's happening on the stage in front of you, the audience walks around from stage to stage to view various short pieces, so that you're actually walking in and moving through the theatrical universe. It's pretty darn cool. There are only three performances (I attended a preview) and I highly recommend you check it out this weekend if you're looking for a fun and unique adventure that's part theater, part neighborhood tour, and part community gathering.

The adventure begins at the beautifully restored historic Union Depot in St. Paul, where the audience is divided into 12 small groups (I was told the max size is 40, but there were only five in my group which was a great size for us all to get to know each other a little bit). Each group is given directions to their destination where they meet their "roamer," or tour guide for the night. You are then led to various locations in St. Paul's Lowertown neighborhood (a neighborhood with which I was not very familiar, but of which I am now a fan) to view short pieces. It's almost like a mini-Fringe Festival, in that there's a great variety of work presented and you're never sure what you're going to see next. I will refrain from telling you any details about any of the performances because I don't want to ruin the delightful surprise of it all. Suffice it to say that I experienced many different kinds of theater, including but not limited to: music, puppetry, storytelling, dance, folktale, circus, painting, poetry, and things I'm not sure have a name. The pieces were in turn odd, funny, beautiful, creepy, delightful, sad, silly, moving, fun, trippy, and fascinating. They took place in locations as various as the bright and open waiting room at the Depot, a darkened room, a rough and unfinished basement, an alley, and a lovely park. Walking around the dark and deserted streets with a small group of companions and only a lantern to light our way, it was as if we were on our own private adventure, with everything happening around us seemingly a part of the show.

My group attended seven of the nine performances going on that night (according to the program, which also includes a handy map), and we were just one of 12 groups. I don't really get how that math works (and I'm good at math), but it's an impressive logistical feat by director Noah Bremer and team to make it all work! Since I attended the first and only preview performance, there were a few moments of extra time here or not enough time there, but in general it all ran remarkably smoothly. And it's an adventure, so it doesn't have to be perfect, that's part of the fun.

I just can't recommend this highly enough; it's the best adventure you can have for $15! Wear your walking shoes, dress for the weather (i.e., hot and and humid), carry a water bottle (although there are a few water stops along the way), bring your adventurous spirit, and be aware of what's happening around you, for around each corner is a new wonder to explore. The adventure begins this Friday, Saturday, and Sunday at 8 pm (but they ask that you arrive by 7:30 to allow time to be sorted into groups and take care of logistics). Be sure to visit the Facebook event page for details on location, parking, and ticket info. Have fun!