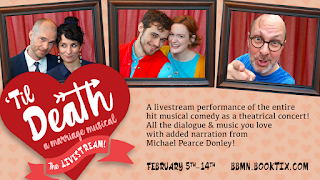 Bucket Brigade Theater premiered their new original musical 'Til Death, written by and starring co-founders Jeremiah and Vanessa Gamble, in 2012. They've presented it at Art House North in St. Paul's West 7th neighborhood since 2015 for Valentine's Day. This year, they've turned it into a concert version, streamed live from Art House North into your house! I've seen the musical twice in the past before watching the premiere of the livestream last night, and I'm truly impressed at how the charm, silliness, and heart of the piece has translated into the virtual space. And it's about as close to live theater as we can get these day. Only four more performances remain - one tonight and three next weekend (click here for more details).

Here's the plot summary from my review of the 2019 production: Olivia and Ethan (played by Vanessa and Jeremiah), a couple who has recently separated, find themselves alone in a cabin in the woods on their 15th anniversary weekend, thanks to a Parent Trap like trick. Alone, that is, until obnoxiously happy newlyweds show up at their door with car trouble (played by real life marrieds Anna and Damian Leverett of Orchard Theater Collective). Freddy (her) and Leslie's (him) ooey-gooey overly affectionate love is in stark contrast to Olivia and Ethan's troubled marriage. But nothing is as perfect as it seems, including Freddy and Leslie's marriage. Each couple tries to help the other couple through their problems, and in doing so is somehow able to see their own problems in a new light and work through them as well, agreeing to live happily ever after... 'til death.

When I heard this was a "concert version," I pictured actors standing on a stage in front of a music stand singing. But it's so much more than that. Yes, the four actors mostly stand on stage (the two couples at either side) in front of a music stand, but it's a full-out performance from all of them, bringing out all of the drama and humor of the script. There's even a dance break and some clever camera work to spice things up. Piano accompanist Michael Pearce Donley reads the stage directions and narration, in such an enthusiastic and congenial way that it feels like he's sharing his favorite story with the audience. The whole thing is very cleverly and smoothly put together (with additional direction by Elizabeth Efteland) so that it transcends a filmed concert performance into something more inviting and engaging. It really felt like I was virtually in the cozy and welcoming space of Art House North with them.

'Til Death has always been a cute, funny, silly, and heart-warming piece. That hasn't changed, even without sets, staging, or even being in the same room as the performers. This livestream is a fantastic option for those of you who, like me, miss theater desperately. Tickets for the four remaining performances are available on their website, for a sliding scale fee depending on who and how many are watching it.