"'Til Death" by Bucket Brigade at Art House North 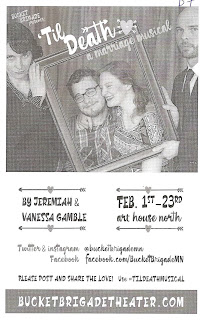 In 2012, Bucket Brigade premiered their new original musical 'Til Death. The funny yet poignant examination of marriage has become an annual event, with creators Vanessa and Jeremiah Gamble playing a separated couple on their 15th anniversary, and a #TCTheater married couple playing the honeymooners they encounter at a secluded cabin in the mountains. This is my second time seeing the show in the charming renovated church known as Art House North in St. Paul's 7th Street neighborhood. It's very funny (a little more over the top than I remember), and relatable even if you're not among the good and crazy married people. And even though it would play nicely as an intermissionless 90-minute musical, the delicious cupcakes and coffee served at intermission (included in the price of admission) in the cute church basement lobby, accompanied by live music, makes for a festive evening.

Here's my (slightly modified) review from the 2016 production:

Olivia and Ethan, a couple who has recently separated, find themselves alone in a cabin in the woods on their 15th anniversary weekend, thanks to a Parent Trap like trick. Alone, that is, until obnoxiously happy newlyweds show up at their door with car trouble (played by real life marrieds Anna and Damian Leverett of Orchard Theater Collective). Freddy (her) and Leslie's (him) ooey-gooey overly affectionate love is in stark contrast to Olivia and Ethan's troubled marriage. But nothing is as perfect as it seems, including Freddy and Leslie's marriage. Each couple tries to help the other couple through their problems, and in doing so is somehow able to see their own problems in a new light and work through them as well, agreeing to live happily ever after... 'til death.

This lovely small-scale musical features piano accompaniment by Michael Pearce Donley (who also takes requests for intermission). Art House North is an old church turned into an art space, which makes for a unique and intimate space to watch theater. There's no need for amplification in a small space like that, which allows the beautiful voices of the four actors to ring out clear and pure. The score is clever, funny, and tuneful, with some nice repeated themes throughout the show.

The former altar space of the former church has been turned into a cozy cabin by scenic designer Katie Phillips, with warmth created by lighting designer Courtney Schmitz. Behind imaginary walls we see the bathroom and a bedroom, in addition to the open kitchen and living room areas, which allows for private and not so private conversations between various pairs of characters as they move around the space.

'Til Death is a funny and poignant story with catchy songs and great performances by two married couples as two married couples. These are professional actors, they don't have to actually be married to play a convincing married couple, but knowing that they are adds a level of truth to the proceedings, I imagine for the actors as well.

'Til Death continues through February 23.