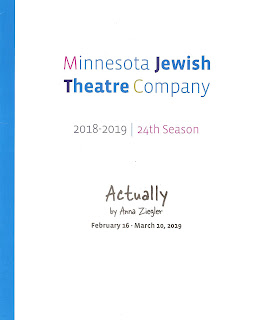 I don't think there's ever been a time in our culture in which we've been so aware of the issue of consent. It wasn't a thing when I was growing up. But thanks to the #metoo movement, there's much more discussion and awareness of consent in the last several years, so naturally it has made its way into theater too. In Anna Ziegler's new play Actually, receiving its regional premiere at Minnesota Jewish Theatre Company, two college students find their lives upended by their (mis)understanding of consent. Featuring two of #TCTheater's best young actors, Actually is a powerful and incredibly timely play that will hopefully get audiences thinking and talking about this important issue.

We meet Princeton first year students Amber (Miriam Schwartz) and Tom (JuCoby Johnson) on their first date, a little drunk and flirty and having a good time getting to know each other. The perspective then shifts to a later time looking back on what happened that night, which they both remember differently. When they went back to Tom's dorm room and things got heated, she didn't exactly say no, what she said was "actually" as she pulled away, but she didn't say yes either. She tells her friend that Tom "practically raped" her, her friend reports it to their RA, who reports it to the appropriate authorities. Tom is called in for violating the college's sexual misconduct policy, and there's a hearing to determine the truth. But unlike a criminal trial that must prove guilt beyond the shadow of a doubt, Tom is told that in this hearing, if it's 50/50 as to whom to believe, if a feather comes down on either side, that's where the decision is. The play doesn't tell us which side that feather of justice lands on, rather it explores both perspectives and lets the audience make their own decision. The issue is further complicated by race, as both parties are aware of the implications and historical context of accusing a black man of assaulting a white woman (see also Emmett Till).

The play is structured as a duologue, my new favorite word to describe these kinds of two-hander plays in which the two characters mostly deliver separate alternating monologues, only occasionally interacting in scenes together. It's a true "he said, she said" as we learn about each individual's life, past, and perspective. Both characters are flawed but sympathetic. Tom is a musician who spends the first months of college sleeping with as many girls as he can, but connecting with none of them. Amber is awkward and smart (she can't decide if her favorite book is Gone Girl or The Iliad) with some unpleasant encounters in her past, but eager to make a new start at college. The characters and dialogue are very real, frank, and honest, and both actors give raw, present, and truthful performances, often speaking directly to the audience, that make you believe each character when they're speaking.

It surprised me to learn that this is #TCTheater artist Harry Waters Jr.'s local professional directorial debut, he's such a fixture that I assumed he'd directed already. He's done a great job navigating the shifting timelines and tones of the play (there is some humor amidst the drama and trauma), and gets wonderful performances from both of his actors.

The setting of the play is in various dorm rooms, classrooms, and other college locations, but instead of trying to represent each location, the set (designed by Michael Hoover) is a blank canvas of stone gray squares and platforms of varying height. This allows the dialogue and performances to be the focus, while the imagination fills in the rest. Lighting cues (designed by Michael Wangen) help us with the perspective changes from monologue to scenes to flashbacks.

Consent is a complicated issue and we need to do a better job of educating our young people about it. On the night I attended, there was a talkback and a group of college students in the audience who really seemed to relate to it and wished all of their peers could see it. There were also older people who could relate to it as well, because obviously this has been happening forever, we just didn't have the proper language to talk about it until now.