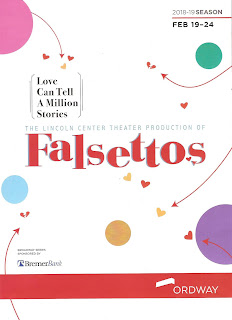 #TCTheater friends, do yourselves a favor and dig out of the snow to go see the tour of Lincoln Center Theater's recent revival of the gorgeous musical Falsettos, playing at the Ordway Center through Sunday only. I first experienced this unique gem of a musical through the filmed version of the Lincoln Center production, which played in movie theaters a few years ago. I've been listening to the cast recording ever since (Christian Borle, Andrew Rannells, and more), but nothing compares to seeing it live. It's absolutely stunning and this touring cast is perfection. It's a true love story in every sense of the word, including the messy, unpredictable, and sad parts. I was enraptured for the entirety of the nearly three-hour runtime (and you know I usually can't bear shows that long!), and left in tears with my heart overflowing. If you're a fan of music-theater, you don't want to miss this show. Keep reading and I'll tell you why.

The musical we now know as Falsettos began as a trio of one-act musicals with music by William Finn. After all three played off-Broadway, the latter two (with book co-written by frequent Sondheim collaborator James Lapine) were combined to form Falsettos, which premiered on Broadway in 1992, winning Tonys for best score and book. The first act introduces the "tight knit" but unconventional family consisting of Marvin, his wife Trina, their son Jason, Marvin's lover Whizzer, and Marvin's psychiatrist Mendel, who eventually marries Trina. There's a lot of drama, but a lot of love too as they try to figure out how to be a family. The second act includes new characters Dr. Charlotte and Cordelia, the lesbians next door. It's a story about gay men in the early '80s in NYC, so you can guess where this is going, and where the doctor comes in. This little family has to deal with AIDS, and Jason's bar mitzvah, both of which are traumatic experiences that only serve to bond them tighter. What I love about this story is that it's not just a story of romantic love (although Marvin and Whizzer's love is passionate, messy, and real), but also of the love of parent and child, of co-parents who are no longer together but still forge a life together, of friends, neighbors, community. They say you can't choose your family, but this family chose each other.

Falsettos is not your typical Broadway musical (which is a good thing in my book) for several reasons. There are only seven actors (five in the first half of the story), no chorus line, and no big dance numbers. And it's entirely sung-through, with a score that is brilliant both lyrically and musically, and harmonies that are so beautiful they break your heart. This isn't the typical dialogue - song with verses and chorus - applause break - repeat kind of musical. The constant singing keeps the emotions heightened, and there are a lot of emotions. It's funny, painful, awkward, poignant, and heart-breaking. All of these characters are so real and human that you can't help but feel for them despite their flaws.

Another reason to fall in love with these characters is the dreamy cast. In a cast this small you need strong performances from every member, and original director/book writer James Lapine gets that from this cast. The first act is a well balanced pentagon of performances. Max von Essen gives a natural, believable performance as Marvin, equally infuriating and sympathetic. Nick Adams has all the beautiful bravado required of Whizzer, but also brings out his vulnerability. Eden Espinosa is a force of nature as Trina; her performance of "I'm Breaking Down" is a comic highlight. Nick Blaemire is adorably nebbish as Mendel, and little Thatcher James (sharing the role with Jim Kaplan) totally holds his own with the grown-ups. They each have their moment to shine individually, but the best moments are when they're all singing this beautifully complex score together. In Act II, Bryonha Marie Parham and Audrey Cardwell as Dr. Charlotte and Cordelia add a nice balance of estrogen and really complete this little family.

If you saw the movie, the set (designed by David Rockwell) will look familiar. Like a puzzle game from Survivor, or a 3D Tetris, a large cube is unpacked by the cast in shapes that form the walls and furniture, in front of the NYC skyline. It's fun to watch the shapes appear and disappear as they move, kick, and throw the pieces around. The "teeny, tiny band" consists of just a piano, keyboard, reeds, and percussion, which is appropriate for a musical this scale. They're onstage behind a scrim, occasionally visible so we can give them a well deserved cheer.

I'm hoping that the success of this revival leads to a local production or two in the coming years; I'd love to see some of my #TCTheater faves tackle these rich roles, perhaps with a staging of this intimate story that's more intimate. But in the meantime, don't miss your chance to see this stunning musical. It's not the big splashy Broadway tour you might be used to, which is what makes it so special, and us so lucky that it's on tour. Visit the Ordway website for info and tickets, or check out the discount tickets available on Goldstar.