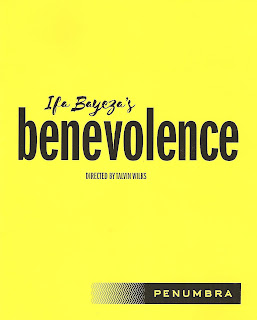 Five years after producing The Ballad of Emmett Till, Penumbra Theatre returns to the 1955 horrific murder that became a catalyst in the Civil Rights movement with the second installment in playwright Ifa Bayeza's trilogy - Benevolence. While Ballad was about Emmett himself - his life, family, and community as well as his tragic death, Benevolence explores the lives of two couples involved in his story. The first act focuses on the white woman who accused Emmett of assaulting her, and her husband, one of his murderers who was acquitted and then later confessed. The second act focuses on a black couple whose lives were touched by violence in the wake of the trial. The playbill notes, "like the land in its time, the play is segregated." It almost feels like watching two different plays, or two one acts around the same theme. Both are, like the first part of the trilogy, devastating and engrossing, and shed more light on this important historical event and the people involved. This world premiere play continues at Penumbra through March 10.


The first act tells the story of Caroline Bryant, the woman at the center of "the incident," who some 50 years later admitted that she lied in her testimony. We meet her before her encounter with Emmett, and see her side of the exchange. Then comes her husband's violent reaction, the trial, and even her decades later questioning. Sara Marsh gives a raw and compelling performance, as you almost feel sorry for Caroline due to the men controlling her, at the same time you feel outraged at her lies and participation in the murder. Peter Christian Hansen is equally raw, and more than a little terrifying, as several men in Caroline's life including her husband, her brother-in-law, and a lawyer. While there are more characters in the story, the playwright has chosen to just use two actors in each act, often speaking to people in the scene whom we don't see or hear. This has the effect of making this large and complicated story a more intimate one.

In the second act, we meet Beulah Melton, a wife and mother who takes in laundry (including those perfectly starched white shirts mentioned in the first act) and makes dolls to support her family. Her husband Clinton witnesses something related to the attack on Emmett Till, and Beulah begs him not to say anything for his safety and that of her family. She even expresses outrage at all the attention payed to this murdered boy from the North, when she has seen so much violence against her people, with very little attention paid. When that violence finally affects their family, it's even more devastating because of the loving life and relationship we've observed between Bee and Clint, in direct contrast to the ugly relationships of the first act. Dame-Jasmine Hughes and Darrick Mosley (who played the title character in The Ballad of Emmett Till) are both wonderful and believable as these two characters and several others in their story.

Both acts take place on the same set (designed by Maruti Evans, who also designed the set for The Ballad of Emmett Till), in what looks like a courthouse with walls covered with words about the case. Eight hats hang on one wall over two rows of empty chairs, like the ever present invisible jury. The first act set is dominated by a heavy wooden table, the second act adds a bed, and both feature detailed props and on-stage changes of the muted period costumes (props design by Abnee Warmboe, costumes designed by Mathew LeFebvre). Several period TVs are placed around the set, which display actual footage or photos from the events, or subtle hints at the setting (projections design by Kathy Maxwell).

Benevolence is a beautifully written play(s), telling two related but very different intimate stories at the center of this national tragedy. It's beautifully directed by Talvin Wilks (the Twin Cities Theater Bloggers' favorite director of 2018), and just impeccably designed and acted by the company. It's a heavy play, but important in understanding the racially motivated violence and hate crimes that we're still dealing with today. I'm looking forward to seeing the third part of the trilogy, That Summer in Sumner, someday in the not too distant future.