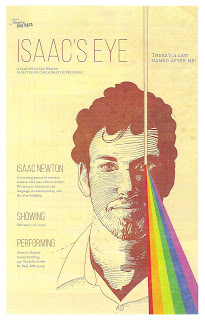 In Isaac's Eye, playwright Lucas Hnath (recently nominated for a Tony for A Doll's House: Part Two, soon returning to Broadway with Hillary and Clinton) imagines the life of one of our most famous and most prolific scientists - Isaac Newton. The smart, funny, modern play, well written and well realized by Theatre Pro Rata, is one of those plays that will get you thinking about issues big and small. Similar to the theme of Sunday in the Park with George, a young Isaac is forced to decide between home and family, and his passion and work in the larger world. The play seems to question whether or not his hard work and sacrifice is worth it if he died alone. Looking at all of his contributions to the world of science, I would answer a definite yes. If he had chosen a small town family life, giving up science, we wouldn't now how gravity works! But that's a question for each viewer to grapple with and decide for themselves.

The play takes place early in Isaac's career, before any of his many famous discoveries and writings. He's trying to break into London society and make his mark, enlisting the help of one Robert Hooke (you know, of Hooke's Law). Hooke becomes threatened when he hears about Isaac's work, that directly contradicts his own: Isaac believes light is made up of particles, Hooke theorizes light is waves. After much discussion, experimentation, and blackmail, Isaac is forced to make a choice. His sort-of-girlfriend Catherine demands that he choose between a life and family with her, and his science career. I'm not crazy about a female character whose only through-line is that she wants to get married and have kids, to the point where she almost marries a womanizer who's having an affair with his own niece, and gives her boyfriend an ultimatum. But the idea of choosing between a personal life and a life of work and worldly importance is an interesting one, although can't we have both (and in fact isn't that what women have been doing for centuries)?

Although I may not agree with the seeming conclusions of the play, it's really fascinating and thought-provoking. The play is written with a narrator (played by the affable Michael Quadrozzi) explaining the situation to us, announcing scenes and locations, and even admitting that some things in the play are true while others are made up. He promises that every time they say something true, they'll write it on the chalkboard that dominates the set (designed by Julia Carlis). And indeed, by the end of the play the chalkboard is covered with facts. It's fun is fun to watch it fill up, especially for math/science nerds like myself. And a special kudos to whoever chose the soundtrack of sciencey songs, including the obvious choice - They Might Be Giants' "Particle Man" (sound design by Jacob M. Davis).

Paul LaNave is compelling as Isaac, portraying his very real turmoil over his choices, and his absolute devotion to his work. Edwin Strout is a great adversary in Hooke; much of the play is a dance between these two scientists, and both partners perform it well. Stanzi Schalter does as much as she can with the aforementioned girlfriend-who-only-wants-to-get-married-and-have-kids role.

Isaac's Eye continues through February 17 at Gremlin Theatre's intimate space in St. Paul, a fascinating imagining of the inner life of one of our most famous scientists.