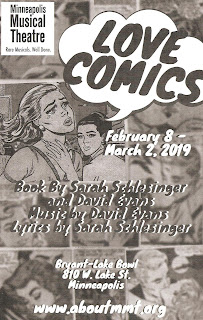 Confession: I've never read comic books (unless you count the graphic novel Fun Home, because theater). I didn't even know there was such a thing as love comics, which apparently were love stories in comic book form, popular in the mid last century. But I know about it now, thanks to Minneapolis Musical Theatre. The musical Love Comics plays loving and playful homage to the tradition of romance comics. Big emotions, melodrama, love lost and found, and fun '50s era costumes. It's a clever and cute little show playing on Bryant-Lake Bowl's cute little stage through March 2.

Love Comics follows the travails of a couple of single girls, drive-in car hop Andrea (Amanda Marie Mai) and scientist Felice (Yvonne Freese). Andrea's goal is to marry a millionaire, while Felice makes herself dumb so as to better catch a man. But don't worry, this is all very tongue-in-cheek and makes fun of these old-fashioned romantic tropes. They both soon separately meet the millionaire doctor Troy (Zach Hays) and fall in love immediately. He meets Amanda first and they become engaged instantly, while Felice spends her time pining and looking for him. But Zach's mother (also Yvonne Freese) doesn't approve of this fortune huntress marrying her son, and hires private eye Kyle (Adam Rousar) to dig up some dirt on Amanda while sending her son on a trip around the world. This being a love comic, Kyle of course falls in love with Amanda. This contorted love quadrangle continues through death, amnesia, travels to NYC, and an eventual (sort of) happy ending.

The score is really clever and funny, and well sung by the cast accompanied by music director Anna Murphy on keyboard. Director Joe Hendren (also heard in voice-over when the characters attempt to change the script) gets great performances from his cast, all delightfully over the top. There's no set to speak of on the small stage, but plenty of silly props (designed by Sara Kessler) that the cast utilizes in their storytelling.

I love to get to BLB when the theater opens at 6 (for 7 pm shows) and have dinner before the show; there's full food and drink service in the theater. And with the perfect 90-minute runtime (about as much as the concept can sustain), you're out by 8:30! Love Comics is a really fun, cute, entertaining show. Another example of MMT's "rare musicals well done." (Click here for info and to purchase $19 tickets.)