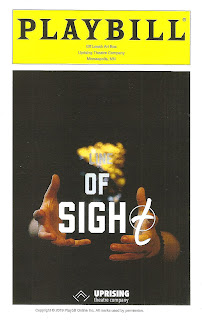 "Uprising Theatre Company really, truly believes that stories can change the world." So do I. And what I love about Uprising is that they partner with local non-profits on every show that they do, increasing the power and possibility of their storytelling to change the world. Their current show Line of Sight, a new play written by founder and Artistic Director Shannon TL Kearns, deals with gun violence in schools, so they've partnered with Moms Demand Action and Students Demand Action for Gun Sense in America. But the play is as much about the bullying of trans kids as it is about gun violence. Line of Sight is a fantastical story, but grounded in reality, about both of these problems that threaten the health and safety of our young people, performed by an appealing young cast.

The hero of our story is Alex (Art Kaiser, a student at SPCPA, with a natural and sympathetic performance), a transgender teenager who recently came out to his parents. They didn't take it well, and his fellow students haven't either, constantly bullying and tormenting him at school. On one particularly awful day, there's a shooter at the school, sending the kids running in panic, and Alex into a sort of limbo world where he's visited by a prophet (Piper Quinn). From here we jump around in time, space, and memory, as the prophet tries to show Alex his power and his choices in this moment. They walk through a number of scenarios, none of them good, until he settles on something that might just make his world a little better.

The ensemble members (Baku Campbell, Elijah Rose, Jeff Miller, Jordan Leggett, Michael Novak, and Valencia Proctor) portray students, teachers, parents, and Alex's inner voices at times. They also create some other-worldly effects as Alex and the prophet are traveling through time. The play is an odd but effective mix of this fantasy world and the harshly realistic world of high school and the misery that kids can inflict on each other. Co-directors Anthony Neuman and Ashley Hovell create a playful environment for the piece without making light of the heavy subject matter.

This was my first visit to Off-Leash Area's new Art Box space in South Minneapolis. It's a cozy intimate black box space, which for this show includes three rows of audience seating on one side. The performance space is dominated by multi-level platforms in the center, a living room couch on one side, and classroom chairs on the other. The cast moves in and around the audience, bringing us into the story.

I’m not sure if this story will change the world, but at the very least it puts a human face on gun violence in schools and bullying of transgender teens, which is something to support. Check out this impactful and thought-provoking 70-minute show through March 2 (and stay for the facilitated post-show discussion, held after every show).