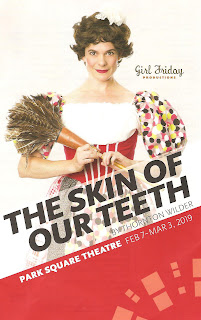 It's an odd-numbered year, and that means it's time for another Girl Friday Productions large cast classic American play (they do one show every other year). I first saw them do Street Scene* at the old Minneapolis Theatre Garage in 2011 and was thoroughly impressed, and depressed that I'd have to wait another two years to see them. But two years goes by faster and faster, and now eight years later I've seen my fifth Girl Friday show, their 3rd in collaboration with Park Square Theatre. They've moved upstairs to the proscenium theater, the largest space in which I've seen them. They fill that space with a cast of 15 playing a list of characters that fills an entire page in the program, and Thornton Wilder's bizarre and profound history of humanity, the Pulitzer Prize winning The Skin of Our Teeth. The three-act two-intermission play pushes three hours, and my ability to stay awake and alert sitting in an uncomfortable theater seat, but it's worth it. There was not a little attrition at the second intermission, but trust me, you want to stay for the third act. So take a nap before the show, get a cup of coffee, carry chocolate in your purse, because the third act is where it all comes together. Thornton Wilder is not telling a story of one crazy family, he's telling a story of the whole crazy beautiful history of humanity. And there's no one better to bring it to crazy weird profound life than Girl Friday.

The story of humanity is told through one typical American family living in New Jersey. Or maybe not so typical. Father (John Middleton) comes home from a long day at the office inventing the wheel, the alphabet, multiplication tables, and the like. Mother (Kirby Bennett) would do anything to keep her children alive, because she's lost so many ("we've always had two children, but not the same two children"). Daughter Gladys (Kathryn Fumie) tries to be the perfect one for her papa, while trouble-maker Henry (Neal Skoy) may have killed his brother. Their maid, and maybe one-time second wife, Sabina (Alayne Hopkins), is fed up with the work and threatens to quit. Father invites some of his friends over, including Moses, Homer, and the Muses. Oh, and it's bitterly cold in August with an approaching wall of ice, and they have a pet dinosaur and woolly mammoth. Just a typical day in the life of your typical American family.

That's just the first act. Fortunately there's plenty of fourth wall breaking to help explain the play, particularly in the form of Sabina breaking out of character and confessing to the audience that she doesn't like this play. In the second act, which takes place in Atlantic City in the '70s (because bell bottoms are fun) when Father is crowned President of the human race, Sabina refuses to act a scene and insists they skip to the end. Every time she breaks from the script, the harried director (Sam Landman) comes onstage to straighten things out. Finally, in the third act, we return to the New Jersey home after a long and brutal war, and the director tells us that seven actors have all taken ill from food poisoning, and they stage a little rehearsal with the backstage people (including an usher) who will be filling in. It's all completely ridiculous, but when that final scene happens and we hear from some of humanity's greatest philosophers, it's really quite beautiful and profound. Humanity has had to deal with innumerable tragedies, big and small (including the current administration), but somehow we persevere. And there's great hope in that.

In a note in the program, director/designer Joel Sass describes the play as a "screwball tragedy." And he has achieved just that tone from his large, diverse, and talented cast. They play up the heightened emotions and extreme situations, but also find humanity in the archetypal characters, especially in the third act. The set also fits that tone, with a bright, colorful, almost cartoonish look to the first two acts, and a look of utter destruction in the third. Video projects (designed by Kathy Maxwell) of that approaching ice wall, the Atlantic City boardwalk, and the night sky add to the sense of place. Costumes (designed by Kathy Kohl) are also bright and colorful and a little too much (in a good way), not to mention the best dinosaur and woolly mammoth Halloween costumes you could ask for. Mission "screwball tragedy" accomplished.

Make no mistake, The Skin of Our Teeth is super weird. It's surprising that it was written in the early '40s, by the same playwright that brought us the class Our Town. It feels like some theatrical experiment that could have been written today. It's a wild and crazy ride, but hang in there, the team at Girl Friday will get you through it to a rewarding end (continuing through March 3).


*A huge thanks to my friend (and frequent usher) Nancy who first introduced me to this company. I wish you were still with us now to see this show, I'd love to hear your thoughts on it. RIP.