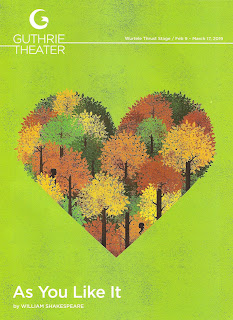 As You Like It is one of Shakespeare's most fun romantic comedies because of the inclusion of music (song lyrics written into the script) and his usual happy ending that includes not just one, but four blissfully wedded couples. I first saw this play at the Guthrie in 2005 (near the end of my 2nd of 16 and counting seasons as a subscriber), when they used a trippy hippie '60s theme. Their new production is not that; the wardrobe is modern, and the songs are more folk/Americana (original music by Broken Chord). But it's still super fun, charming, with a fantastically talented and diverse cast, and just an all around pleasant evening.

The basic story is this: the new duke has banished the old duke, his brother, to a life in the forest. The two dukes' daughters are best friends, so the new duke lets Rosalind keep his daughter Celia company, until she, too, is banished. The young women decide to run away together, in disguise of course, with Rosalind dressed as a man. They take the fool Touchstone with them for company and entertainment, and as usual the fool gets the wisest and most entertaining lines. They run into a bunch of forest dwellers, shepherds, and the like, including Rosalind's crush Orlando. Orlando is also crushing on Rosalind, carving poems and love letters into the trees of the forest. Rosalind in disguise convinces Orlando to woo her as Rosalind, you know, for practice. Eventually everyone's identities are revealed and everyone gets their happy ending.*

I dug out that old program from the 2005 production and was pleased to find two returning cast-members. Guthrie favorite Nathaniel Fuller reprises his role as Adam, and brings humanity and gravitas to the role of the long-serving servant to Orlando and his family. Sarah Agnew played country girl Audrey in 2005, and now plays the fool Touchstone, who woos and marries Audrey (here played by the charming Marika Proctor). Her humor in this role usually played by a man is endlessly delightful (see also Scapin).

My favorite moments of the show are when cousins/BFFs Rosalind and Celia are onstage, their friendship is wonderful to behold, and the true love story at the heart of this piece. Their portrayers Meghan Kreidler and Andrea San Miguel (making a welcome return to #TCTheater) are both funny and real and fun to watch. Other highlights in this cast with too many highlights to mention are Angela Timberman as the morose Jacques (bringing new life to the famous "all the world's a stage" speech), Chris Thorn (last seen upstairs in the studio in The Acting Company's production of this play in 2013) as the two very different Dukes, and Guthrie newcomers Jesse Bhamrah as the affable Orlando and Brandon Dahlquist with a beautiful baritone voice as Amiens.

Director Lavina Jadhwani is also making her Guthrie debut, and does a great job keeping the story moving and the multiple storylines and characters clear, with an overall jovial tone. Scenic designer Junghyun Georgia Lee has brought the forest inside the thrust stage, and costume designer Ilona Somogyi has created a wide range of fun, modern costumes that go from the court to the country.

The fun, modern, light-hearted, accessible As You Like It continues through March 17.


*Plot summary borrowed from what I wrote about Classical Actors Ensemble's production a few years ago.