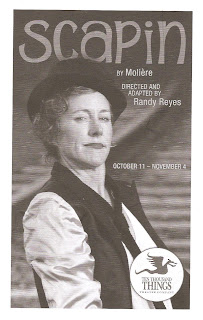 This spring, Michelle Hensley left the company she founded 25+ years ago, Ten Thousand Things, through which she nurtured a new kind of theater. The kind of theater that thinks first about the audience, makes the storytelling accessible to everyone, and brings theater to people who may never have experienced it before. I think we were all a little worried about the future of TTT without their esteemed leader, but never fear. Michelle has taught us well, and left the company in great hands - those of new Artistic Director Marcela Lorca, as well as adapter/director of the first post-MH show, Randy Reyes. This fun and wacky adaptation of the Moliere comedy Scapin is very TTT, and an absolute delight. Long live Ten Thousand Things!

Based on Moliere's Scapin the Schemer, this version of Scapin (pronounced skah-PAN, because it's French) is very playful and set in a time and place outside of reality. There are love stories, long lost children, arranged marriages, and unhappy parents. As a framing device, the wonderful six-person cast sings an intro and conclusion that explains the story and set-up, which I found to be quite charming. This helps the uninitiated with all of the plot twists, as does the color coding of the families (Madame Arlene, her son Octave, and servant Sylvester all wear blue, while Mr. Gary, his son Leo, and servant Scapin all wear green, in bright and playful costumes by Sonya Berlovitz). When buddies Octave and Leo fall in love with the wrong women while their parents are away, they call upon the smart and conniving Scapin to help them.

I always want my first exposure to a classic piece of theater to be through TTT, because they make it understandable, relatable, modern, and fun. There are several references to current events, with language that feels natural (and silly). With all the lights on, the cast has a ton of fun with each other and the audience, asking us to hold an imaginary knife or represent a character referred to. There's nothing serious about this one, it's all silliness and wonder.

Sarah Agnew plays the title role, and is a bundle of energy as Scapin schemes their way through the story (in typical TTT style, there's a bit of gender bending among the characters). Also great are Ricardo Beaird (a newcomer to TTT but not to #TCTheater) as Octave; Elise Langer as tough dude Leo and Octave's weepy love Hyacinth; Kris Nelson as the other, less confident servant Sylvester; and Kimberly Richardson and Karen Weise-Thompson as the wealthy, powerful, less than pleased parents. Also watch for some clever double-casting for Leo's circus girlfriend. And of course, the action of the story is beautifully underscored by Peter Vitale (occasionally referred to and brought into the playground).

Seeing a Ten Thousand Things show makes me happier than just about anything, especially when it's a wild and silly romp like this one. I can't even imagine what effect this much light has on the dark places they visit (like prisons and homeless shelters). What more important work is there than that?

Scapin continues through November 4, with paid performances at Open Book on Washington Ave. in Minneapolis and free shows around the area. Recommended if you need to laugh and connect for a brief 90 minutes or so.