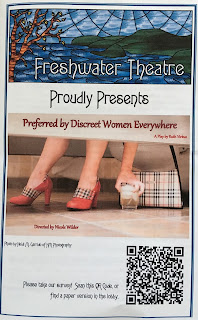 This fall, Freshwater Theatre is featuring new work by women artists, and they couldn't have picked a better time. In rep with a short play festival called "The Feminine Surcharge," they're presenting a collection of three short plays set in a women's bathroom. A place where many of us spend a considerable amount of time. While my visits to the restroom are usually less dramatic than these, it certainly is a place for drama, for strangers coming together, for friends having intimate conversations, for women hiding from undesirable people or events outside the bathroom door (true confession: I've been known to spend a longer time than necessary in the bathroom when events are awkward or boring or uncomfortable). Ruth Virkus' three plays under the title Preferred by Discreet Women Everywhere explore these ideas. The result is funny and real and poignant, and feminist. An all-female cast and creative team shouldn't be as rare and novel as it is, but you can witness it now through October 28 at the Crane Theater in Northeast Minneapolis.

These plays are so connected that they could be seen as three acts of the same play featuring different sets of characters. In the first, Preferred by Discreet Women Everywhere, Mary (Rachel Postle) is hiding in the bathroom from her blind date and her ex when her old high school friend Lauren (Victoria Pyan) walks in. The two reminisce, and Mary reluctantly shares what has her so upset. Except that she can't tell her the worst of it, she saves that for Lauren's sister-in-law Siobhan (Lacey Anne Zeiler), who also joins them. Children, affairs, careers, and more are discussed in this long visit to the women's room.

After a short intermission, two more scenes play out, in what could be one long evening at an upscale Minneapolis bistro, as see through the window of the bathroom. In Lucy and the Calamity of Jane, teenage Lucy (Aidan Jhane Gallivan) and her soon to be stepmom Jane (Wini Froelich) come to terms with their new relationship. It turns out Lucy isn't upset because she doesn't like Jane, but because she does like Jane and doesn't want to see another marriage end in divorce.

Finally, we have 10:00, Bistro Caprice, perhaps my favorite of the triptych. In what is largely a one-woman show, Lydia (a fantastic Mame Pelletier) flees to the bathroom after an altercation in the bar that leaves her expensive new silk blouse stained with red wine. She takes off said shirt to soak it in the sink, and realizes too late that she has nothing else to wear. Trapped in the bathroom, she encounters helpful and not so helpful people - Julia (Shae Palic, who also co-directs) and Bonnie (Tinne Rosenmeier, who also appears briefly in the other two pieces, linking them together), before reclaiming her own power to resolve the situation.

The eight women in the cast are all great (although it would be nice to see some diversity), and director Nicole Wilder strikes a nice balance between humor and realness, consistent throughout the pieces. Set designer Ursula Bowden has replicated a women's bathroom to a T, complete with working sink, paper towels, and realistic looking stalls. The sound of flushes and tinkles are provided by sound designer Katie Korpi, completing the effect.

Preferred by Discreet Women Everywhere is a smart, funny, and real evening of theater by women artists. Thanks to Freshwater Theatre for bringing us this novel concept! Click here to visit their website and find out more information about these plays, as well as the short play festival.