"I Come from Arizona" at the Children's Theatre Company 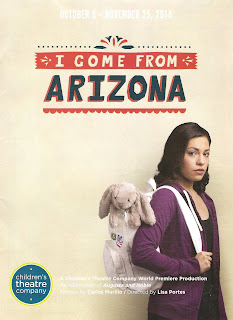 Two world premiere new works of theater are premiering at the Children's Theatre Company this fall (which is actually not that unusual for this company that focuses on new work). The main stage production of Last Stop on Market Street closed today (to make way for everyone's favorite furry green grump, another CTC original), but downstairs on the smaller Cargill stage, I Come from Arizona continues through the end of November. This very timely play (adapted by playwright Carolos Murillo from his play Augusta and Noble) speaks directly to the issues of the day, issues that children in the audience may be experiencing first-hand. Gabi is the child of undocumented immigrants, and has far more worries than any 14-year-old should. This production makes what for some of us may be abstract immigration policy ideas seem very real, and very human.

We meet Gabi when she is awakened in the middle of the night by her father, who is packing to leave on a trip. He tells her he is going to visit her sick Abuelo in Arizona, but you know there's more to the story than that. Gabi is especially nervous because she's about to leave her South Side Chicago neighborhood and travel an hour and a half on public transportation each way to the best school in the city, located on the North Side. Her father's out of town, who knows where and for who knows how long, her mother is working extra hours to support them, she has to pick up her little brother from school and take care of him, and she's adjusting to a new school. No wonder she's stressed! Adding to that is her first project in her Global Perspectives class, in which she's supposed to give a presentation on her family's roots, which her mother wants nothing to do with. Her more privileged friends don't understand why she's having trouble with the project and can't hang out with them after school. Eventually Gabi's mother tells her the real story of where they came from, teaching Gabi the real meaning of Global Perspectives.

The play is mostly in English, but with Spanish spoken frequently, particularly by Gabi's Mexican immigrant parents. Despite the fact that I don't speak a word of Spanish (well, maybe a word, or two), I never felt lost. The Spanish is used in a way that's easy to understand because of context, or gestures, or another character repeating it in English. I heard not a little Spanish spoken in the audience before the show and during intermission, and it's fun to hear Spanish speakers' instant reactions to the dialogue. How refreshing it must be to hear your story, your language, spoken from the stage.

Under the able direction of Lisa Portes, this wonderful cast is led by Ayssette Muñoz, an adult actor from Chicago who makes a convincing 14-year-old, easily conveying all of the angst, uncertainty, confusion, and determination of that age. She's joined by CTC-trained youth - Antonio De La Vega and Madison Neal as Gabi's new school friends, and the darling Luca La Hoz Classara as her little brother. Nora Montañez gives a wonderful performance as Gabi's hard-working mother who only wants to protect her. Ricardo Vázquez is strong and warm in the all too brief appearances as Gabi's father (and a few other characters). Rounding out the cast is Shá Cage as the friendly neighborhood crossing guard and the coolest teacher you could ask for, and onstage understudies Ananda Córdova Stuart, Enzo La Hoz Calassara, and Sara Magnuson as other students.

The design of this show may be a little more simple than some of the lavish shows upstairs at CTC, but no less effective. The stage space easily transitions from the family kitchen scene on the left, to Gabi's bedroom on the right, to the school or other location in the open center space. On the wall behind the stage are painted faces of hard-working immigrants, watching over the story and reminding us who it's really about (scenic design by Yu Shibagaki). Gabi has a couple of scary dreams, made even more scary by some cool sound and lighting effects (sound design by Victor Zupanc, lighting design by Paul Whitaker). And the costumes (designed by my favorite #TCTheater costume designer Trevor Bowen) help to show us who these people are in subtle but interesting ways, even down to each student's unique backpack (and I'm not ashamed to admit that I'm a little obsessed with student Fiona's wardrobe of unique sweater/skirt combinations, and Ms. Chan's comfy-chic maternity wear).

I can't imagine what it's like to be a young person in today's world, that seems so much darker and more confusing than when I grew up. With I Come from Arizona, Children's Theatre casts one of today's most important issues in a light that kids can understand and relate to. Without politics or complicated policy details, but simply from the human perspective, with a story similar to what they or someone at their school might be experiencing. The website recommends this play for "receptive 8-year-olds and up," and might be best enjoyed by middle school age and up, depending on the child of course. You can find more specific guidelines, and info about tickets, at CTC's website.