"The Great Society" at History Theatre 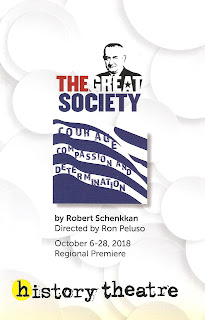 I'm not sure I've ever seen a play that feels (and is) as much of a direct sequel as History Theatre's production of Robert Schenkkan's The Great Society, a sequel to All the Way that History Theatre produced just a year ago. This play continues right were the last one left off, with Lyndon B. Joynson's second term as president (or really, his first full term after taking over for JFK halfway through his term). History Theatre reunites most of the cast and creative team from last year, including director Ron Peluso and Pearce Bunting as LBJ, a performance even more powerful than last year. What also continues from the last play is "political machinations, the Civil Rights movement, and the ugly opposition to freedom and equality for all," with a bonus - the rapid escalation of the Vietnam War. The rhetoric used by everyone on stage is disconcerting in a "the more things change, the more they stay the same" kind of way, as is the divisiveness of a country torn in two by politics. The Great Society is long, dense, and kind of depressing, but it's also extremely rewarding, and important to examine our history to give insight into the issues of today.

All the Way ended on a high note, with LBJ passing The Civil Rights Act in 1964, which he fought so hard for. The Great Society starts off on this high, with LBJ full of plans to bring about "The Great Society." Plans to end poverty and racial injustice, to improve education and employment opportunities for ALL Americans. But then Vietnam happened, and everything fell apart, so much so that he chose not to run for reelection in 1968 after four very difficult years. Or perhaps more accurately, LBJ let Vietnam happen. He stressed to his staff that domestic policies were his number one priority, but when the Secretary of Defense came to him asking for air strikes, then ground troops, then 20,000 more troops, then 300,000 more troops, he reluctantly agreed. It's not clear why he didn't just say no, except that each time he seemed to think that this would be the final push to peace. It wasn't, and the nation turned on LBJ. 1968 also saw the assassinations of his frenemies Martin Luther King, Jr. and Bobby Kennedy, and it seemed that JFK's vision that began the decade with optimism was gone forever. Like I said, kind of depressing.

I wrote this last year about All the Way, and it's still true: "This play has a huge cast of nearly 20 excellent local actors, none better than Pearce Bunting as LBJ. He's always a fun actor to watch, but this is one of his best performances as he disappears inside the character of LBJ, and what a character he was! Pearce has it all - the accent, the mannerisms, the laugh, the rage, the desperation to accomplish his goals. His performance is the number one reason to see this play (other than the important history lesson). He's surrounded by too many talented men to name (highlights include Shawn Hamilton as Martin Luther King, Jr. and Andrew Erskine Wheeler as Minneosta's own Hubert H. Humphrey), plus three great women (Jennifer Blagen, Patty Mathews, and Jamila Anderson) who play mostly wives and secretaries. It's quite sobering to see how these important conversations and decisions involved primarily men, reiterating the importance of having women in the room where it happens." (Side note: VOTE!)

If anything, everyone's performances are even better this year as they get to dig deeper into these characters that were real human people, especially Pearce, who takes LBJ to a place of desperation and capitulation. A seemingly impossible transformation considering the arrogant bastard he started out as, but Pearce makes it believable and makes LBJ a sympathetic character even as he admittedly lies to the American public, betrays his one time allies, and sends more and more young men to Vietnam to die.

The play is structured the same as the previous one: "LBJ is sitting at his desk for much of the play, and many of the conversations play out over the phone. How to make that dramatically interesting? Have the person on the other end of the line step forward from the circle where the ensemble is sitting for much of the play, then turn around and converse directly with LBJ as he drops the receiver. Even when the location is elsewhere, like discussions between MLK and NAACP, LBJ is there in the background, poring over paperwork at his desk. And behind him, actual historical images are displayed, adding visual impact to what these men are talking about (video design by Kathy Maxwell)." And the Oval Office is still "beautifully and roundly represented on the History Theatre's thrust stage by Rick Polenek's set." Basically they unpacked everything from last year, called (almost) everyone back, and set them loose on this deeper, darker story. I found myself shaking my head in dismay at the similarities to today's world, and nodding my head in agreement at the idea of LBJ's not yet realized "Great Society."

#TCTheater has done a wonderful job programming this fall leading up to this very important midterm election (see also Park Square Theatre's The Agitators, Trademark Theater's Understood, and Prime Productions' Two Degrees, no really, you should also see them!). Go see some theater, have a conversation (ideally with someone you disagree with), and VOTE! (The Great Society continues through October 28.)

Excerpt from Lyndon B. Johnson's 1964 Commencement Speech at the University of Michigan (try to imagine it without the gender exclusive language):


The Great Society rests on abundance and liberty for all. It demands an end to poverty and racial injustice, to which we are totally committed in our time. But that is just the beginning.

But most of all, the Great Society is not a safe harbor, a resting place, a final objective, a finished work. It is a challenge constantly renewed, beckoning us toward a destiny where the meaning of our lives matches the marvelous products of our labor.