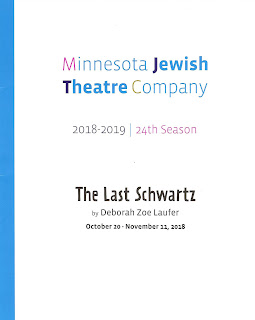 Minnesota Jewish Theatre Company brings us another modern (well, late '90s) Jewish family trying to maintain their cultural identity while living in the melting pot of America. Four siblings gather at the family home in upstate New York for their father's Jahrzeit (one-year anniversary of death), and disagree about just about everything. At times funny, at times heart-breaking, The Last Schwartz is an intense 90 minutes spent with a family that puts the fun in dysfunctional. Or as one character puts it when another laments "why can't you be a normal family?" - "this is a normal family."

On the evening before the Jahrzeit, eldest sister Norma (Laura Stearns Adams) prepares a feast and wants everything to be perfect in this home that they all grew up in, that has now been vacant for a year. Eldest brother Herb (Matt Sciple) wants to sell the place and move on, while his wife Bonnie (Heidi Fellner) is still struggling to be accepted as part of the family after nine years of marriage. Socially awkward scientist brother Simon (Corey DiNardo) is slowly going blind and retreating from everything. Youngest brother Gene (Damian Leverett) shows up late with his new girlfriend, the simple and perky Kia (Emily Dussault). Over the course of two days, we witness the family dynamics and the revelation of some family secrets. Nothing is resolved, nothing is settled, and they all move forward with their lives into an uncertain future.

Just about every character in this play is unlikable at times, but they also feel very real and human, in part thanks to the portrayals by this strong six-person cast. Under director Warren C. Bowles, they feel very much like a family, and work together well as an ensemble. The character of Simon brings an otherworldliness to the otherwise grounded family dramedy, as he dreams about living among the stars that he studies.

Scenic designer Michael Hoover has replicated an old country home, with graying walls and shabby chic furniture that has seen better days. The costumes (designed by Barb Portinga) set us squarely in the late '90s, like you're watching a very special episode of a '90s sitcom.

The Schwartzes are a complicated family, dealing with grief, changing interpersonal relationships, and a modern culture that threatens to leave their history behind. It's enjoyable, familiar, surprising, and at times even uncomfortable (in a good way) to spend 90 minutes with them.